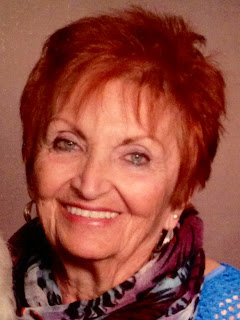 Tess Peros (a.k.a. “Tessie”, a.k.a. “Anastasia”, a.k.a. “Why are you asking me so many questions?”), 83, of Altamonte Springs, Florida, passed away peacefully at home in her sleep on Tuesday, July 26th, 2022.  Her dazzling blue eyes opened for the first time on October 23rd, 1938, the youngest of three children - and the only daughter - born in New York City to John and Stavritsa Ayvas, both Greeks, driven out of their native Turkey during the Greek and Armenian genocide.

Tess graduated from Abraham Lincoln High School in Brooklyn, alongside singer-songwriter Neil Sedaka.  She wanted to continue her education to become a kindergarten teacher, but was discouraged by a well-intentioned, but sadly “old world” mother, who repeated the thankfully retired mantra: “What man will ever want you if you have an education?!”

And so, she began working a Manhattan music industry office job at famed 1650 Broadway - at which she excelled.  Soon after, at a Greek dance in Brooklyn in 1957, 19-year-old Tess was asked for her phone number by a 24-year-old Greek immigrant rascal named George Peros.  Tess said No.  But when George flashed the same insistent smile and Greek dancing moves at a second dance, she said yes.

Tess and George were married on September 27th, 1959, had three sons, Michael, John, and Steven (who all sport “George” as their middle name), and in 1968 moved from Brooklyn to North Babylon, New York, where they raised their young family in working class Long Island.

Tess, an indisputably world class cook of all things Greek, aided George as he founded “GP Painting and Decorating” (later re-christened, “George’s Painting & Decorating”).  Tess became an active member of Babylon’s Saint Nicholas Greek Orthodox Church and its Ladies Philoptochos, and alongside George was instrumental in the tireless fundraising that allowed the church to grow from its humble beginnings in a tiny former synagogue to breaking ground on what is today a glorious cathedral in West Babylon.

As her children grew, Tess worked as a beautician for many years, first in a salon, then privately at her home, and then as a bookkeeper.  But it wasn’t until after “retirement” that she decided to take another stab at what her mom had shot down: working with kindergarten children.  She answered an ad to be a Teacher’s Aid and was hired, enjoying her work more than she ever had in her life.

Tess is survived by her sons, Michael (Barbara), John (Jim), and Steven (Deana), as well as niece Stephanie, nephews John, Teddy, and Gregory, grand dogs, lots of extended family, and her most precious and loyal Misty.  A viewing and Celebration of Life will be held at Dobbs Funeral Home, 430 N. Kirkman Rd, Orlando, FL 32811, on Sunday, July 31st, from 6pm to 8pm.  Colors and laughter are encouraged.  Funeral services will be held at Saint Demetrios Greek Orthodox Church, 129 N Halifax Ave, Daytona Beach, FL 32118 on August 1st at 11:30am.

In lieu of flowers, contributions in Tess’s name would be appreciated to Saint Nicholas Greek Orthodox Church in West Babylon, NY, or Saint Demetrios Greek Orthodox Church in Daytona Beach, FL, or St. Jude’s Children’s Research Hospital.  The family would also greatly appreciate an online condolence, with any story or anecdote you wish to share, by visiting this link: http://dobbsobituaires.blogspot.com/2022/07/tess-peros-a.html?m=1

Dobbs Funeral Home Obituaries at 9:56 AM