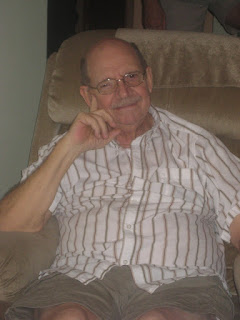 James Patrick McKibben age 66 of Orlando, passed away on Wednesday, February 1st, 2012 at his home. Jim was born in Kingsville, Ohio the son of Elizabeth (Colgan) and Edward S. McKibben. He served in the U.S. Army stationed in Korea during the Vietnam Era. He was self employed as a sole proprietor and salesman. Jim was a member of Mary Queen of the Universe Shrine Catholic Church in Orlando. His memory will be cherished by his wife, Anita (Couture) McKibben; two daughters Lisa McKibben and Lori Aldinger both of Orlando; sister Kay Green of Ohio; two brothers Robert C. McKibben of Chipley and Edward S. McKibben of Uriah, Alabama; 3 grandchildren Jordan, Megan and Sarah of Orlando. A memorial service will be held on Monday, February 6th, 2012 at Dobbs Funeral Home at 11:00 a.m.
Posted by Dobbs Funeral Home Obituaries at 3:58 PM

I would like to extend my deepest sympathy to the McKibben family for their loss. I never personally met James but do know his daughter, Lisa well. If our children are a reflection of who we are then I know he was a wonderful person who smiled often, treated others with the greatest of respect and would do whatever he could to help the people he knew and cared about. I have no doubt that he will be missed. My thoughts are prayers are with you.

To Anita and the McKibben Family....
I met Jim about 52 years ago, and I can still remember that wonderful smile of his. So great to meet him in the halls at Evans HS in the early 60's....His smile was contagous. I would have loved to have seen the smile one more time. There will be many Evans 60's Alumni who will miss Jim. We have lost a number of Evans 60's Trojans over the last year.
With our Deepest Sympathy,
Ray & Gail Adams, '64 & '63 and
The Evans 60's Alumni

Lisa, I did not know your father well. We met only a couple of times, but in those brief meetings it was clear that he was warm and loving person. I know he liked being a handyman for you, building shelves and organizing your garage, and helping you with many other projects. My own father does the same for me, and in those seemingly small gestures there is an outpouring of love. Every stroke of the hammer tells a little more how much our fathers care for their little girls. I know you will miss your dad more than words can express. He left a wonderful legacy in you--a warm and loving friend who never hesitates to be there for others. May you find comfort in the good memories. My prayers are with you and your family.

Anita and family, Jim and I made time to reconnect and share many great times together. We seemingly crossed the same paths only at different times living in Orlando as youngsters. We traveled the sames roads,knew of lil places few knew of and enjoyed each-others company. That's the guy I will miss, he never met a stranger,and always made others smile and a least Laugh..He Loved to hear others Laugh...and caused us to laugh at ourselves too. He made a HUGE difference in my life and will be in my heart always. I share in your sorrow of his passing and Hope I can be 1/2 the man he was. God Bless and comfort you and your girls, Love Always

gator21 said...
Anita and family,
I remember the dark-haired girl down the street, cheerful and steady. Seems incredible that you married your high school sweetheart. Jim was such a nice guy.

To our neighbors, the Aldinger family: we are very sorry for your loss. We saw Mr. McKibben at your house many times since we moved here over ten years ago. He always had a kind word and we especially appreciated the time he spent with our son, including him in fishing trips with his grandson, Jordan. He certainly will live in the hearts he left behind. You are in our prayers.

It seems anything that would be said would be a feeble attempt to express our feelings about a truly wonderful man. Jim has been more than a wonderful man; he was an unbelievable listener - someone you could share your ideas, feelings, concerns or moments of joy and he would give you his undivided attention and a genuine interest in everything you would say or share. Jim was the epitome of kindness in every sense of the word. In all of our years of knowing Jim; I can't recall a negative comment, thought or even expression that was ever made apparent. Jim will be forever missed and we will always wish that we could see him,share with him our thoughts, hear his opinions, see his continuous smile or enjoy his intoxicating kindness - however, our loss here is Heaven's gain and one more angel to watch over us until we meet again. Jim, we will see you again; and, we have been thoroughly blessed and privileged to be a part of your family.

To my dearest Dad, mentor and hero. I will deeply miss those warm hugs and kisses you always had for me. Everytime you looked at me and smiled, I felt that true unconditional love that a fully devoted father has for their daughter. My heart is heavy with sadness that your gone, but filled with so many wonderful memories of the times we had together. I will see you again but it won't be soon enough. You are the most selfless person I'll ever know and I will stive to live the rest of my life in that same loving, carring and giving manner as you have lived your whole life. I love you so much Dad! You, mom and Lisa have always been my best friends. I am the luckiest women in the world to have had you as my dad, mentor, hero and best friend. Your youngest baby who is forever yours. Lori

We are deeply saddened by the pasing of Jim. He always put a smile on our faces with his stories and anidotes. He will be sorley missed as a neighbor and friend.

Anita, Lisa and Lori,
My deepest sympathy for your loss. The time I spent with and "worked" for Jim will always be recalled as a positive and memorable time in my life. I feel as you are still family and my thoughts and prayers are with you.

Anita and family, I did not hear of Jim's passing until Sunday. I was in shock. Jim was the kindest man. He was always there to help anyone that needed it. He had a huge heart. I keep thinking that Russ, Ike and now Jim, the three musketeers I always called them are sitting in heaven talking and laughing. You, Shirley and I were blessed to have the best husbands in the world as well as great dads to our children.
It's just so hard to believe that our husbands are all gone but I look forward to the day we will be with them again.
The thing I will remember most about Jim besides him
always helping is how when he would talk to you on the
phone and always called you sweetie, honey or some other
"pet name" he loved you and the girls so much. Heaven has another angel. If you need to talk, Shirley and I are here for you anytime. We love you.....Lisa

My condolences to the McKibben family. I have known Jim and Anita for 30 years. I just now found that Jim passed. He was a good friend and got me out of trouble many times. All those dinners with Jim & Anita I will never forget. I'm so sorry for your loss.