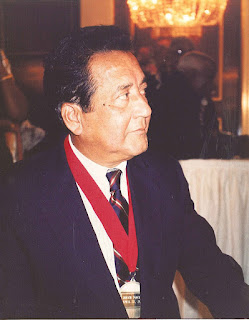 Edgar Francis Pouchet of Orlando, age 75, passed away on Saturday, March 24th, 2012. Edgar was born in Port of Spain, Trinidad the son of Edgar St. John Pouchet and Carmen Codallo. From 1967 until 1969 he lectured music in Trinidad. He moved to Central Florida from California in 1972 and was employed as a musical director for Walt Disney World. He was a member of Sanctuary of Praise Church in Orlando; President of Carnival Association, President of Trinibago Association; Composer of National Steel Orchestra; Ambassador of the Touring Orchestra; Founder of "Gold Posts" Steel Orchestra; Silver Stars Steel Orchestra Arranger and first to compose classical music for a steel orchestra.

I didn't know Mr. Pouchet but I still
wanted to give my regards to the family. In times of loss, a message
from the bible, can give us comfort and hope. Please note the words of John 5:28-"Do not marvel at this because the hour is coming in which all those in the memorial tombs will hear HIS voice and come out."