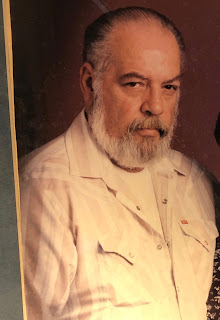 Butch was born on July 17th, 1941 in Baltimore, Maryland to Ross and Hilda Hewitt. He grew up in Rosedale, MD with his siblings: Tommy, Kenny, Ross (Pepe), and Sharon. He received his GED from the United States Army when he joined in 1959. He was stationed in Panama where he met his wife, Zenny, and had two sons, Wayne and Bobby. After moving back to Baltimore, Maryland in 1963, they had 3 more children: Nancy, Kevin, and Dale. Butch retired from the military in 1964. He then became an automotive mechanic from 1965-1974, followed by a career working for a mobile trailer fabrication company for the next 5 years. His last career was in the convention & trade show industry as an operations manager from 1979 until 2008 when he retired from work completely. He and his wife Zenny moved to Orlando, Florida in 1989 where they have lived ever since.

Butch was an amazing and much- loved son, brother, husband, father, grandfather, great- grandfather, and friend to so many. He was stubborn, but wise. His voice was so calming, and he meant the most to so many and was the glue in his family. He loved each and every one of us in a unique way, and never failed to remind us of that. He liked to play the tough role, but was always full of laughter. No matter what the conversation was, it was a goal to hear his laughter at least once before ending a phone call with him. Butch cherished his grandchildren and great- grandchildren very deeply, they brought him all the happiness he could ask for and were one of the main highlights of his days. Butch always joked around about buying them a one- way ticket to Florida. We mourn the loss of Butch’s life and presence in our lives, but we are blessed to celebrate the life we shared with him.

He is preceded in death by his parents, his brothers Tommy and Kenny, his son Dale, and his grandchildren Jeffery and Robert. He is survived by his wife, Zenny, his siblings, Ross (Pepe) and Sharon, his children: Wayne, Bobby, Nancy, and Kevin; his 11 grandchildren, and his 24 great- grandchildren.

If you would like to donate in memory of Butch, his family asks that you make donations to:
The National Foundation for Cancer Research in his name: https://secure.nfcr.org/page/contribute/Honor-and-Memorial-Gifts

Posted by Dobbs Funeral Home Obituaries at 10:37 AM

My deepest sympathies to you and your family. I didn't know Butch as well as others in the Trade Show Industry. But I do know he was well respected by all. Much Love and Prayers as you grieve your loss. Our Hearts are with you. Angela, Mike, Summer and Richie Brown

To the Family of Mr. Hewitt,

On behalf of the National Foundation for Cancer Research, we are terribly sorry for your loss, and pray that you all find comfort at this difficult time. We are extremely grateful to learn that you have selected NFCR for donations in his memory. If there is anything I can help with to relay information about NFCR's work in cancer research, I will be more than happy to help. We are also able to create a special memorial page that you may circulate to your family and friends, displaying Butch's story and photo. If you are interested, I can be reached at my email: dfaruki@nfcr.org.

Thank you again for your support of cancer research and our mission to research for a cure.