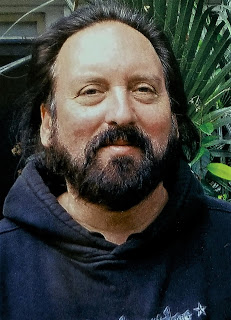 On Wednesday Oct 14 after more than two years battling cancer, John Andrew "Grizz" Elliott, age 62, passed into heaven. John was the eldest son of Earl "Buck" Elliott and Delia D Elliot, both deceased. He was also the loving big brother to James "Jimmy" Elliott, who preceded John in death in 2011. A true Orlando native, John loved his Colonial Town community and Florida's natural parks and beaches. He was an alum of Boone High and UCF, where he excelled in biology and chemistry. John attributed his natural athletic ability to his Grandfather, Andrew "Ponzi" D'Alessandro a 4-time straight pool World Champion and inductee to the Billiard Congress of America's Hall of Fame. John's applied his Ponzi given gifts to the game of table tennis, traveling the US while winning 5 national titles in Men's doubles, all with a different partner.
John discovered his true passion in the hospitality industry, where he was proud to be a Dining Room Manager and Server at the most exclusive establishments in Orlando. John created memorable meals and events for four US Presidents, six Florida Governors and a myriad of celebrities at Lake Nona Country Club, Park Plaza Gardens, Charlies Steak House, Cattleman's and Pebbles, just to name a few. He was also a part of the opening team and the assistant manager at the exclusive car club, Luxautica. He loved people and worked all holidays, including every Thanksgiving morning to serve the needy at the Coalition for the Homeless.
John was extremely grateful for the exceptional care he received at Advent Health Cancer Institute with Dr. Muhammd Imam, Dr. Yaphet Tilahun and their entire teams. They treated him like family and quickly joined John's large circle of friends. Dr Imam commented that he was grateful to John for introducing him and his staff to classic Opera. He learned that just a few minutes of Andrea Bocelli at the end of a stressful day really could melt his stress away!
John was an tremendous supporter of the Arts, from the music of local bands or big-name performers, to stage plays and art festivals. It was his wish that in lieu of flowers, donations be made to the newly formed Greater Orlando Performing Arts Relief at GOPAR.ORG. In partnership with St Luke's, GOPAR provides financial relief and other resources to our local Actors, Musicians, Designers and Technicians devastated by the COVID shutdowns.
John will be dearly missed by his large circle of family and friends, but most especially by his aunts Louisa D. Weever and Madeline D. Masters. A post COVID memorial toast and wake (TBA) will be held at Lee Wortman's Sportstown, where a memorial chair at the bar with John's name and his moniker "The Watcher", will be displayed at every NBA Game.
Posted by Dobbs Funeral Home Obituaries at 4:06 PM