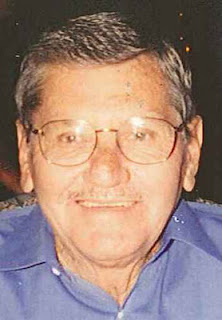 Cecil "Buddy" Mills age 75 of Orlando lost his life on December 3, 2011. He was born on May 24, 1936 i Columbus, Georgia. For the past year and a half, Buddy and his son Brian Clinebell battled cancer together. Brian lost his battle in September of 2011 and Buddy has now joined him in heaven. He leaves behind his loving wife of 37 years, Janice; his children Carolyn (Jimmy) Goodwin, Linda Klein, Sandy Clinebell, Monica Garnett; Michael and Jimmy Mills; grandchildren and great-grandchildren. He was preceded in death by his parents, and his children, Missy, Mark, Joanne and Brian. Buddy was the owner of Budget Fence. Over the years, through his company, he met many wonderful people that became lifelong friendships. He was blessed with their friendship because he was a good friend himself. Visitation will be at 1 pm Saturday, December 10, 2011 followed by funeral services at 2 pm at North Powers Drive Baptist Church. Interment will follow at Chapel Hill Cemetery.
Posted by Dobbs Funeral Home Obituaries at 3:42 PM

janice, linda, carolyn, sandy you know how we feel. we will miss him so so much. he is at peace now and back with brian. anything at all we are a phone call away. peace to you all at this time.

Janice and Family, I am so sorry for your loss of such a GOOD Man, Buddy is at peace now and keepen a eye on Brian, they can take care of each other now just like always. Take care and God Bless you all are in my prayers.

Buddy....you have left us and now are in heaven with all the kids. Take care of them all.

My Darling Buddy.....You have been the love of my life for 37 years. You and I have been through so much over the years, but what a joy to have been your wife. You have taken care of our family because you loved us so much. Brian was especially close to you because you worked together every day....Honey, I can't say how much you meant to me, you were truly my soul mate. We always had time for each other, and conversation was never-ending. I miss you so,so much Hunky,The tears are flowing down my cheeks as i write this. I want you to know I will never stop loving you, never stop thinking of you, and I promise you that someday I will be With you again. Sweetheart, plese take care of Brian so he will feel strong and whole again. Losing my 2 guys that I love in just 2 months is so hard on me, but somehow with prayers and Friends I will maake It. Remeber to Hold Jodie, Mark and Missy in your arms to make them whole again. I will say to you now, my love..REST IN PEACE.................Your Loving Wife (HUNKY-MILSEY)

MY LOVED ONE....The colorful flicker of lights on the tv in his room had come into view with his beloved eyes. He watched with sad eyes and no expression on his face...What was he looking at? Does he feel Did he think?Please let him know that we were always there for him. His falling eyelids closed as the lights grow dim in his mind.....

Iam,all alone now that Linda's gone. Honey, will it always be so loney here? I don't know how to live without you and Brian here. Please God, help me to be strong.......

Hello my darling...I have missed you so very much. I am so so sad Last night i heard the pocket door sounding like Linda had opened the door. She was not even here! I think you my love was watching over me. I felt your strength and realize that you and brian are protecting me. Please my beloved Hunky watch over me and Carolyn, and Linda and Sandy....We all love you so much....

My Dearest Love....I miss you really bad today. Im trying to do some things but nothing matters to me anymore I pray my love that you will be resting with your beloved son, brian. Take care my Angel, remember to hold Brian in your arms. What a glorious reunion you had to meet him in heaven. Thank you honey, for 37 years. Till we meet again...Your Hunkey

Hello my love....You are really on my mind today. Im really miising you, my hunky!! It is very warm outside, and i am sitting on the front porch with some iced tea, thinking of my true love and the times that we spent talking togeather and watching the neighbors. What wonderful and beautiful times with our son, Brian, talking about SpongeBob and all of those silly tv shows that he liked. I sure do want to remember those pieces of our daily life that we had together. RIP my Darling....

Hello Birthday,
Sending you many wishes on your birthday. Hope you get lots of presents from the angels (and Brian) for your special day. We miss you.
Love,
Linda

And Why did I say hello Birthday? I meant to say Hello Buddy. Well you can be birthday if you want because it is your special day.

My darling Buddy, you have always been a big apart of my life! I still miss you so much. You were everything to me! I love you my hunky Do! Until we met again, my love!