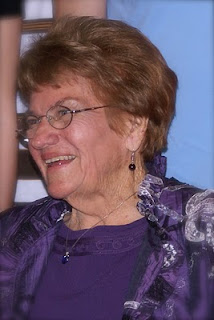 Edna Jewell Fouts, 88 of Orlando, Florida went to be with the Lord on October 17, 2010. Mrs. Fouts was predeceased by her husband of 55 years, Oscar M. Fouts. Edna was born in Florala, Alabama on February 19, 1922 to Willy and Flossie Watson. Edna graduated from Leesburg High School. She met and married Oscar, an Army Air Corps cadet, and together they traveled and lived in many places including Tokyo, Japan and Kwajalein Atoll, before settling in Orlando. Edna was passionate about her love and service for the Lord Jesus Christ, her children Karen, Kenny, Kathy, Kristie and Kerry, 15 grandchildren, 12 great grandchildren, and sister Virginia Watson Fouts. Visitation will be at Dobbs Funeral Home, Orlando, Thursday, October 21st, 2010 from 5:00 until 8:00 pm. The funeral service will be on Friday, October 22nd, 2010 at 9:30 a.m. at First Baptist Church of Central Florida, followed by interment at the Florida National Cemetery, Bushnell. In lieu of flowers, donations may be made to the Missions' Fund, First Baptist Church of Central Florida, 700 Good Homes Road, Orlando, FL 32818, or VITAS Innovative Hospice Care, 2075 Loch Lomond, Winter Park, FL 32792.
Posted by Dobbs Funeral Home Obituaries at 3:01 PM

To Kathy, Rick and family: I was saddened to hear of your Mom's passing. She was a very special part of the Bratcher family for many years. Edna and Oscar truly loved the Lord and never lost sight of who directed their lives. Her Love of the Lord; children, grandchildren and friends was the essence of her being. My life has been richly blessed by her and I know we will meet again. My love and prayers are with each of you during this difficult time. Edna would want us to celebrate her life today and as hard as that is I will try and honor her wish. Love, Charlene Griffis

Edna was a very special lady. I loved her and Oscar very much. One thing you always knew for sure about Edna was where she stood with our Lord! She was not ashamed to let people know they needed the Savior. When I first met her at Tabernacle almost 40 years ago, I liked right away! My mother was hundreds of miles away and she just stepped right in and filled the spot. I'm grateful for her testimony as a Christian and know that I shall see her again.

To kerry and Chrissy,

We are so sorry to hear of your Mother's passing. May peace come over your entire family knowing your Mother is in Heaven singing with the Angels. Our love and prayers are with you at this difficult time.

Always here for you,
Bobby and Michelle Duszynski

Kathy and family, What a pleasure it was to know your mom. A woman of God who love to laugh, never a bored moment with her. Must I say she was a "HUGE KATHY WALKER FAN" and so are we, so we had great conversations. Can you fathom how happy she is now with this new body?? WOW!!! I've been missing her presence for a while, as I am sure you have missed her more. Just know what you have to look forward to. Thanks for sharing such a beautiful woman. Love Ya! Ida, Angie and Ariel Thomas

Our thoughts and prayers are with the entire Fouts extended family as we join in mourning her passing and in celebrating her life. May the love that surrounds you be a source of comfort to you all. We did not know Edna well, but we DO know that she raised two of the finest gentlemen (and gentle men) that we know in Kerry and Kenny. May she rest in peace.
With love and sympathy,
Connie and Ralph

Edna would light up any room or anyplace that she walked into. Her presence was refreshing with lots of laughter. My more recent memories of her were our Searcy family reunions at Hickory Point, Lake County. She brought enough food for everybody, even though we always brought food to share, too. Her bubbly personality, laughter and talk of sports, are great memories. I have missed being with her for too many years.
I love you, Edna Jewel.
See you in Heaven one day,
Martha Searcy Bullard

To the family of Edna. I am sorry to her of your mom's passing.I just want to let you know you are all in our prayer at this time of need. She was such a joy to be around. I really love being at her house when I was a young girl. Mom and daddy said to tell you they are thinking of you all. Love Robin Brown, Also Hugh and Betty Brown

I didn't know Ms Fouts personally
but I still wanted to give my regards to the family. In times of loss and sorrow I've found that the bible gives us comfort and hope. An encouraging verse is found
at First Corinthians 15:21,22-"For
since death is through a man, resurrection of the dead is also through a man. For just as in Adam
all are dying so also in the Christ all will be made alive." Jevon--Winder, GA

This is such a wonderful useful resource that you are providing and you give it absent free of charge. I love seeing web sites that understand the value of providing a quality useful resource for free. It?s the old what goes around comes around program.