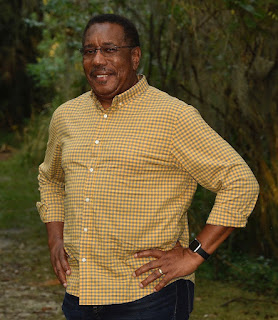 Michael Angelo Curtis, age 64 of Clermont Florida, went home to be with the Lord on the morning of December 23, 2020. While his passing was sudden, he was surrounded by his loving family as he entered into Eternity. Michael was born November 25, 1956 in Nassau, Bahamas to William and Barbara (Farrington) Curtis. He was their first born. In December 1995, while on a trip to Botswana, he met the woman who would become his wife; the incomparable Suzanne Curtis, nee Horton, of Bulawayo, Zimbabwe. They were married June 4, 1997. From this union they produced three remarkable sons, Michael (Mikey), Gabriel (Gabie) and Mitchell. Micheal loved the Lord and for 25 years was a faithful member of First Baptist Church of Orlando.

Those who knew him are well aware that Michael was not only educated but also an intellectual with an unquenchable curiosity. He was an excellent listener who enjoyed hearing different perspectives and entering into spirited conversations. As a boy, he attended Lindisfarne College in Wales where as a scholar and athlete he earned his primary and secondary education and formed lifelong friendships. He was very active in the Lindisfarne alumni group. His educational journey took him through the University of London and University of Tennessee, Knoxville, culminating with a graduate degree from Nova University where he earned his Master of Computer Science. His professional career consisted of several adjunct professorships, and consulting jobs in IT.  With all of his accomplishments, Michael’s most grand was that of husband and father.

Michael loved the arts, science and engaging in cross cultural experiences. This was expressed when he played the saxophone, listened to his eclectic music collection or openly reflected on various articles he had read from across a variety of sources and disciplines. He enjoyed watching his sons compete in multiple local, regional and international competitions. He was a true family man concerned not only for his immediate family but also for his siblings and cousins. He was a frequent contributor to the family Whatsapp™ chat making fun quips and providing great insights. He could also be counted on to provide wisdom and solutions to various situations on which family and friends sought his advice.

Michael is survived by his wife Suzanne, and sons Mikey, Gabie and Mitchell. He is also survived by his parents William Curtis and Barbara Curtis. His siblings Sherry Curtis of Nassau Bahamas and Billy Curtis of San Francisco, CA. His nephew Shalando Strapp and great nephew Treshawn Strapp of Nassau, His first cousins Kimberlee Prioleau of Rockhill SC; Francois Guillaume of Atlanta, Ga; Rosheene Adams of Charlotte, SC; and Rajya Smith and Rupert Adams of Nassau Bahamas. His mother-in-law, Joyce Horton, Bulawayo, Zimbabwe and a host of cousins and other family and friends, across the USA, Canada, The Bahamas, The United Kingdom, South Africa, Zimbabwe, and Austria. He will also be dearly missed by his many friends.

In lieu of flowers the family requests donations be made to the Michael Curtis Memorial Fund, https://tinyurl.com/mike-curtis-memorial.

The family will be receiving friends at 10:00 am, followed by the funeral service at 11:00 am on Thursday, January 7, 2021 in the Henry Chapel at First Baptist Church of Orlando located at 3000 South John Young Parkway, Orlando FL 32805 with Pastor Bill Mitchell officiating.  Private Family Only interment will follow the service at Oak Hill Cemetery in Clermont.

If you are unable to attend the service in person,  January 7, 2021 at 11:00 am, please see the virtual link below which will begin moments prior:

My dear brother-in-law😭. May His precious soul rest in eternal peace. A true example of what a father and husband should be. Will be deeply missed.

My family and I are in total shock at this news. We are truly saddened at the passing of our friend and a truly great individual and role model. Our condolences to the entire Curtis family. Jim, Jo Ann and Jada Alafat