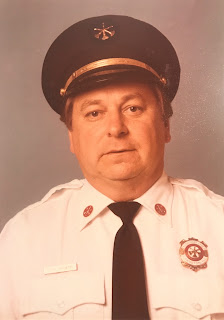 After graduating President of his class in Emerson High School in 1954 in Gary, Tom enlisted in the United States Navy and served on the Battleship USS Wisconsin BB64 from 1955-1957. Like his father before him, Tom enjoyed a long career as a firefighter.  From 1962-1991 he was a passionate advocate of fire prevention and lead programs in the Evanston public elementary schools to raise awareness in children. He retired at age 54 as the Division Fire Chief for the Evanston Fire Department, after almost 30 years of the civil service. Upon Tom’s retirement he realized the need to keep retired firefighters informed and connected. Chief Linkowski brought the brotherhood of firefighters together by creating his pride and joy, “The Fire Line” publication.  He subsequently spent much of the next 30 years still keeping in touch while enjoying retirement in the warmth of Florida, an environment he adored. He loved his job as a firefighter, and always had a story or lesson to share of these treasured days.

A practicing Catholic, Tom was baptized at St. Hedwig Church in Gary, Indiana, raised his family at St. Athanasius, Evanston, Illinois and attended mass weekly at St. Mary Magdalen Catholic Church in Altamonte Springs, Florida. Tom made friends easily and enjoyed social clubs including being an active member of the Elks Lodge for 61 years and made a point to visit local lodges wherever he roamed. A patriotic American, Tom was a proud Republican who loved to travel the country and prided himself in his quest to visit all the fifty states of America. Tom was a loving father, uncle, grandfather, son, brother, friend, handyman and always the good neighbor. He had a bench outside of his townhome where he enjoyed sitting, talking to neighbors, reading mail, checking out the birds, and waiting for someone like the "cookie lady," to bring him a sweet treat. Most often if someone in the neighborhood needed a tool he could help out. There is a void on Maple Oak Circle. His Florida friends and his family will miss him dearly.

A service will be held at St. Mary Magdalen Catholic Church | 861 Maitland Avenue, Altamonte Springs, FL at 1:00 pm on Friday, January 15, 2021. A celebration of his life and Interment of his ashes will be held in Illinois at a later date due to the pandemic restrictions.

In lieu of flowers send donations to The Evanston Police and Fire Foundation at www.epff.org

Posted by Dobbs Funeral Home Obituaries at 9:27 AM

I gets incredible information in your blog
Funeral Homes
Hospitals