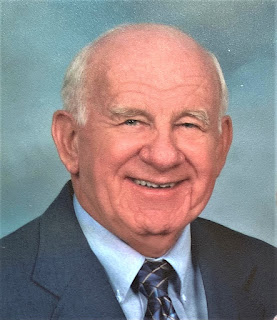 Max was born in Jersey City, New Jersey on September 14, 1933. He was the son of Max and Veronika Mittelhammer, who emigrated from Germany, and older brother of Doris.

He attended the Academy of Aeronautics and graduated in 1956. He started working as an engineer at Lockheed Martin in Baltimore, Maryland, before moving to Orlando in 1957. He also completed projects at Cape Canaveral. He retired from Lockheed Martin in 2001.

Max loved to dance and listen to jazz music. He met his beloved wife, Veronica “Toots”, at Arthur Murray Dance Studio. They moved to Pine Hills, where he resided until his passing. They were married for 61 years.

Although a man of few words, Max had a quick wit and kind heart. He enjoyed spending time with his family and traveling abroad with his wife and daughter. He became an avid Georgia Bulldogs football fan when his granddaughter went to college.

He is preceded in death by his parents, Max and Veronika, and his sister, Doris Garand.

Max was an avid member of St. Andrew’s Catholic Church.

In lieu of flowers, family and friends are invited to make a donation to St. Andrews Catholic Church or St. Jude Children’s Hospital.