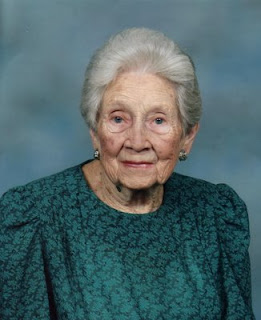 Gertrude Heinz Lauerman, our mother, began a very long life journey on Nov. 29, 1911, on the family farm of her parents in Stetsonville, WI; and she ended her sojourn with us on Apr. 16, 2009, in a nursing facility in Ocoee, FL, while undergoing rehabilitation for a broken hip. As chance may have it, her day of passing occurred on the 24th anniversary of the death of her beloved husband, Rudolph Lauerman; on the 70th birthday of her only daughter, Joan Marie Lauerman Healy of Orlando; and on the eve of the 66th birthday of her only son, Brother Terrence Robert Lauerman, of De Pere, WI. For the Rudolph Lauerman family, mid April seems to have become a concentrated time of birthing and rebirthing. Mom’s final moments were happy and peaceful. Mom was in audible prayer. She indicated to her caregivers that she was dying, so the nurses sang her a song of good bye. A big smile came on her face, and she just peacefully stopped breathing. We are very grateful for the care and love shown to our mom at the Lake Bennett Health and Rehabilitation facility as well as at the Summerville Assisted Living Home in Ocoee during her final days and later years of life. Mom, the youngest daughter of Joseph Heinz and Clara Jaeger, had two older sisters, Clara Heinz Diener and Josephine Heinz Kennedy, both of whom are deceased. Mom grew up on the Heinz farm on Cold Spring Road in Greenfield after the family moved back to the Milwaukee area in 1917. She graduated from St. Matthias Grade School and West Milwaukee High School. Prior to her marriage in 1938, she worked as a secretary for Advance Realty in Milwaukee. During the child-raising years mom worked as a full-time homemaker. As we her children left the nest, she took a part-time job at Bomberg’s Bakeries in Milwaukee and West Allis. In retirement, she and dad moved to Orlando to be near their grandchildren and to escape the cold northern winters. She then took a part-time job assembling sprinklers for her son-in-law, Mark Healy, at Senninger Irrigation. Her real joys and hobbies in life included cake baking, canning, gardening, playing cards and doing the daily crossword puzzles in the newspaper. She could play a mean game of double solitaire. None of us can forget her special pickles, and fabulous desserts. Her most typical pose was sitting in her stone wall flower garden in Greenfield with a weeding hoe and grass trimming shears in hand amid a riot of colorful tulips, zinnias, and numerous varieties of perennials. In addition to 16 great grandchildren, her two children, and son-in-law mom is survived by five grandchildren; Janet Healy (Chuck) Hyman of Atlantic Beach, FL; Lois Healy (Michael) Craven of Keller, TX; Carol Healy (Carl) Kennedy of Ocoee, FL; Daniel (Patti) Healy of Hamilton, Montana; Barbara Healy (Robby) Campbell of Kingwood, TX. Mom, we all will miss your keen sense of humor and clever comments. We also will miss you always standing at the window waiting for us as we came to visit you. No doubt you are already at the window panes of heaven waiting for us to arrive at our own appointed time in the future. Adios, y hasta la vista, mama. A memorial Mass will be celebrated at St. Andrew Church in Orlando, FL on Saturday, May 2nd at 10:00 AM . In lieu of flowers, please make a donation to St. Andrew St. Vincent De Paul or your favorite charity.
Posted by Dobbs Funeral Home Obituaries at 3:05 PM 122 comments:

Donna Newman Carlton, of Maitland, FL formerly of Baton Rouge, LA passed away on April 28, 2009. Donna was born in Vicksburg, MS to C. E. (Ed) Newman and Ida M. Newman. She was a graduate of Broadmoor High School and Louisiana State University where she was President of Delta Delta Delta Sorority. She was a passionate music lover and talented pianist. Donna lived life with energy, a positive spirit and genuine passion for family, friends and LSU Tiger football. Donna was preceded in death by her father C. E. (Ed) Newman and leaves to cherish her memory, mother, Ida M. Newman of Baton Rouge; son Keith Carlton of Maitland; daughter, Kathryn Carlton of Tampa; Mr. & Mrs. John Newman of Baton Rouge; Mr. & Mrs. William E. Newman of Westminster, CO, Mr. & Mrs. Thomas Newman of Baton Rouge; nephews, Blake, Chris, Stuart and Gordon Newman; uncle and aunt, Mr. & Mrs. John McGregor. Visitation will be held on May 1st, 2009 at Noon at St. Patrick Catholic Church in Baton Rouge, LA followed by the Church Mass at 1:00 PM. Interment will be at Roselawn Cemetery in Baton Rouge, LA. A memorial service in Central Florida will be held at St. Mary Magdalen Catholic Church at a later date. Donations may be made to the LSU Foundation. “GO TIGERS!!!”
Posted by Dobbs Funeral Home Obituaries at 4:07 PM No comments: