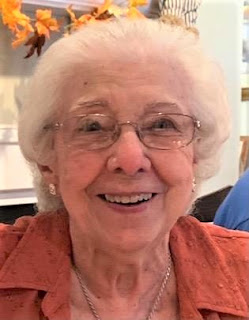 Alice Blanche Boler, loving wife of 68 years to Joseph W. Boler, passed away July 26, 2021. She was born on June 12, 1930 in Fall River, MA. Joe and Alice relocated and have resided in Orlando, FL since 1960. Alice’s love of children and literature was shown through her wonderful career as librarian at St. Andrew Catholic School. Alice and her husband Joe were extremely active in the seniors groups for both St. Andrew Church and RAMM (Lockheed Martin). During their retirement years, Joe and Alice traveled extensively in the United States and abroad. They so enjoyed every minute they spent together. As well, Alice enjoyed her time with the Ladies Guild of St. Andrew Church. Alice was a devout Catholic, loving wife, mother, grandmother,  and the most caring and loving person in the world. She will be loved and missed by all. Alice is survived by her loving husband, Joseph, her loving children Rose-Marie, Michael, and Carol-Anne, her son-in-laws Harold and Billy, and her three grandsons Joey, Clay, and Alex. Memorial Mass will be held on August 7, 2021 at 1:30 PM at St. Andrew Catholic Church, 801 N Hastings St. Orlando, FL 32808. In lieu of flowers, donations may be made to 2021 Walk to End Alzheimer’s – Greater Orlando – In Memory of Alice Boler, http://act.alz.org/goto/AliceBoler.

*To the world, you are a mother,

but to your family, you are the World*

Posted by Dobbs Funeral Home Obituaries at 11:46 AM No comments: 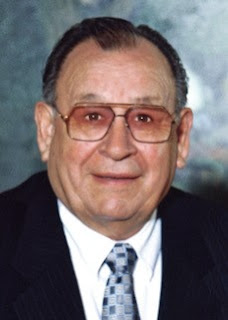 Richard F. Knuth was born June 5, 1930, in Seward, Nebraska to Harry and Lydia (Barth) Knuth. He passed away on July 19, 2021, at the age of 91 in Orlando, Florida.  The family lived in Seward, Lancaster, and Saunders Counties until moving back to Seward County in 1950.  There he met and fell in love with Nancy Imig. Dick and Nancy were united in marriage on December 28, 1954.  To this union, they had two sons, Daniel Fredrick and Bradley Richard.

In 1958, Dick and Nancy moved across the country to Orlando, Florida to open the office of Cather and Son Drywall, where Dick served as Vice President until he became President of the Company in 1969. Cather and Son became one of the three largest drywall businesses in the United States. Drywall projects included the Vertical Assembly Building at the Kennedy Space Center, several large projects within the Walt Disney World Resort, many hotels throughout the state of Florida, as well as numerous high-rise condominium complexes spanning both coasts. They also operated their own rolling mills plant to fabricate steel studs and manufactured their own line of joint compound. In 1977, Dick also became a partner in a nursing home venture which built, owned, and operated a number of nursing home facilities throughout Florida.  Dick later formed Eliason and Knuth Drywall Co. of Florida, uniting with Eliason and Knuth Companies of Omaha, Nebraska.  In 1984, he sold his interest in the drywall business and formed Knuth Construction Company with his two sons, Dan and Brad. The three Knuth men enjoyed working together for many years building custom homes in Southwest Orange County.

Dick served on the Board of several established banks for over a decade from 1974 to 1985. In 1985, he cofounded Seminole National Bank, where he served as a director until 1992. In 1990, Dick served as a Director of Master Builders Council and was appointed by an Orange County Commissioner to serve on the Orange County Board of Zoning Adjustment.

Beginning in 1980, Dick and Nancy invested in several Nebraska farms, which they eventually grew into a family business involving their two sons. Together, Dick and Nancy loved spending their summers in Nebraska visiting with their relatives and lifelong friends while managing the farms. Dick and his eight brothers and sisters were raised on a farm, and he was happy to be able to return to his roots.

In addition to his parents, Harry and Lydia, Dick was preceded in death by four brothers: Gerald, Wilbur, Lawrence, and Robert.

Dick accomplished much in his 91-year-life, but he made it clear that he was most proud of his wife of 67 years, his two sons and their wives, his five grandchildren, and his ten great grandchildren.

Funeral arrangements in Florida by Dobbs Funeral Home, Orlando, Florida, (dobbsfuneralhome.com). Services will be held at First Baptist Church Orlando, Henry Chapel, 3000 S. John Young Parkway, Orlando, FL 32805 on Saturday, August 7, 2021. Visitation will be 10:00 AM to 11:00 AM; Service at 11:00 AM; Reception following in Faith Hall.

The service will be lived streamed from First Baptist Orlando at the following link:

Funeral arrangements in Nebraska by Zabka-Perdue Funeral Home, Seward, Nebraska, (zabkafuneralhome.com). Date and time of the service will be forthcoming.

Posted by Dobbs Funeral Home Obituaries at 2:47 PM No comments: 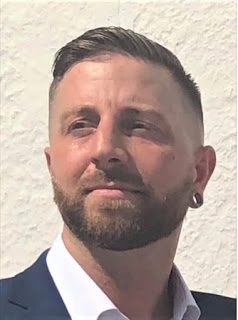 Born July 21st, 1984 in Sarasota, FL, David was a contractor for Global Draperies Inc. for 21 years, in addition to working as an event & booking coordinator for MVK Music Group. He was passionate about his work and actively involved as both an avid supporter and promoter of his son’s music career with the band Cold Subject and their blossoming presence. David’s adventurous spirit and ability to unconditionally help strangers are each benchmarks of which many of us hope to seek and emulate.
David Jr. is survived by his son Corey Hausterman, his father & stepmother David and Lana Hausterman, mother Gina Felser, three sisters Alex Medina, Jessica Hausterman, Jennifer Lynn Hausterman, two brothers Matthew Hausterman (spouse Jennifer Leigh Hausterman) and Christopher Dell, nephews Clayton, Elijah, Liam, Samuel and Jack, nieces Daisy and Harper, grandmother Janice Felser, and numerous loving and caring aunts, uncles and cousins. David is preceded in death by grandparents Elmer and Helen Hausterman, Charles Felser and Arcesio and Gloria Jaramillo.
David's Celebration of Life will be held at 11:00 a.m. on Saturday, July 31st, 2021, at the First Baptist Church of Orlando's Henry Chapel. Pastor Jeff Thompson will officiate.
Posted by Dobbs Funeral Home Obituaries at 10:15 AM 2 comments: 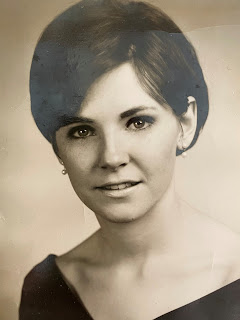 On July 12, 2021, Janet (Orfanello) Fontano died at her home in Orlando, FL just shy of her 74th birthday after a long battle with pancreatic cancer.

Janet was a loving mother, grandmother, and wife, A wonderful sister, and a loyal friend with a boundless joy for living. An endless supporter of her children’s endeavors. Ball games, plays, musicals, rock shows, Janet would always be there laughing, cheering, dancing, and smiling. A zest for travel, art, film, and music, Janet’s tastes were varied and passionate.

A private ceremony will be held later this year.  The family asks that in lieu of flowers, donations be sent to her favorite charity St. Jude’s Children's Hospital.

Posted by Dobbs Funeral Home Obituaries at 1:56 PM No comments: 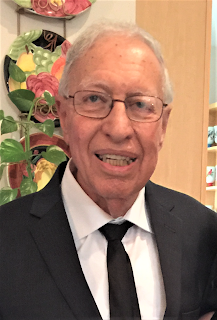 It is with a heavy heart that we say goodbye to Nicholas Carioti, Sr.  He was a beloved husband, father, grandfather, great-grandfather and uncle.  He was a rare man that had purity of both heart and soul.  He was admired and loved by all that knew him even briefly.  Nicholas passed away peacefully in his sleep in the early hours of Monday, July 5, 2021 of heart failure.

He is survived by his wife of 62 years, Rose Carioti, three sons, Alphonso, Nicholas Jr. and Albert as well as five grandchildren and one great grandchild.

Nicholas Carioti only saw the best in anyone he met and always wore a smile.  He was always ready with a story to tell or a joke to make.  He was deeply loved and will be greatly missed.  His passing leaves a large, irreplaceable void in our family.  Goodbye Dad, Alphonso Carioti.

The family will be receiving friends on Saturday, July 10, 2021 from 10:00a until 12:00p, followed by the funeral service at Dobbs Funeral Home with Deacon Spencer Silvers officiating.

Posted by Dobbs Funeral Home Obituaries at 10:02 AM 1 comment: 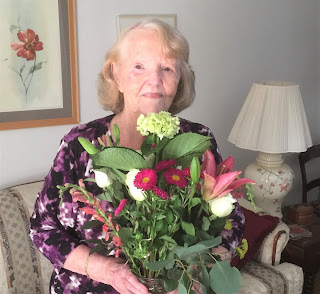 Sarah Huckeba Mann, 99 of Winter Park, passed away peacefully in her sleep on June 12, 2021.  Sarah was born in Rome, Georgia on October 26, 1921 to Delia Zuber Couch and Ralph A. Couch.  She was married for 42 years to John P. Huckeba, Sr. until his passing February, 2004.  She was the proud mother to three sons all residing in the Orlando area (John, Jr., James C. and J. Steve Huckeba) and had four grandchildren and five great-grandchildren.  She moved to Orlando with her family in 1954 from Marietta, Georgia.  For most of her life, Sarah was a traditional housewife and mother.  When her sons were in high school, she took a part-time job at Jordan Marsh in Orlando where she worked for several years.  Several years after the passing of her first husband, she married Homer Mann who passed away in 2000.  Sarah loved to cook, read and raise Orchids.  She was pre-deceased by her sister and six brothers.  She will be interred next to her first husband at Woodlawn Cemetery in West Orange County.
Posted by Dobbs Funeral Home Obituaries at 9:48 AM No comments: 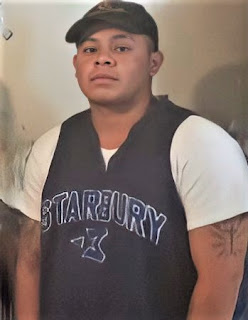 Marco Antonio Hernandez Tobias, age 21, of Orlando, FL passed away Sunday, June 27th, 2021.  He was born in Raleigh, North Carolina, the son of Claudia (Hernandez) Tobias and Saturino Hernandez-Garcia.  He was employed in construction.

Calling hours will be from 5:00 pm to 8:00 pm on Thursday, July 1st, 2021 at Dobbs Funeral Home.  The service will be held at 7:00 pm with Deacon Spencer Silvers officiating.  Interment will be in Mexico.

Posted by Dobbs Funeral Home Obituaries at 11:11 AM 1 comment: 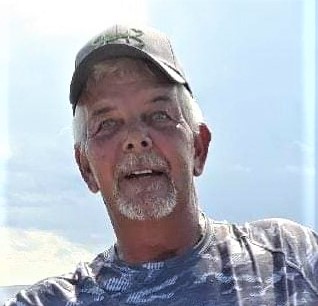 Eric Eugene Lutes, known to everyone as “Rick”. Passed away unexpectedly on June 27, 2021. Rick was born on January 14,1960 in Connersville Indiana. He was the oldest of six children born to Richard & Eileen Lutes.

Rick graduated from Connersville High School in 1978. He found his passion for carpentry while taking building trades in High School. He would later move to Florida to own & operate Rick’s Framing Incorporated for 35 years. He was by far one of the hardest working men we will ever know. Rick had an outstanding ability to read a blueprint and navigate the project to completion even when pertinent information was left off the blueprints. Rick inspired many to pursue their own dreams just as he did.

He was preceded in death by his mother Eileen Lutes Nichols and his youngest brother Michael Lutes, both of Connersville, Indiana.

Rick will be remembered for his integrity, work performance, and his generosity.  Rick’s memory will live on in the hearts of all who knew and loved him.

The family will be receiving friends from 10:00 a.m. until 12:00 noon.  The funeral service will follow visitation on Friday, July 2, 2021 at The Lakeside Church with Pastor Jason Hitte officiating.  The church is located at 100 County Line Court, Oakland FL 34787.

Posted by Dobbs Funeral Home Obituaries at 9:21 AM 6 comments: