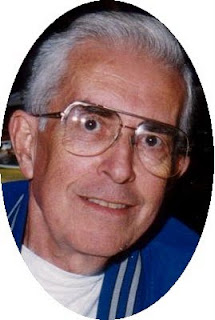 Mr. M. Leigh Whitney, 75, of Orlando went to be with Jesus, his Lord on Thursday morning, August 20th, 2009, after assuring and being re-assured that all of his children knew Christ. Leigh was born in Norfolk, VA, the son of the late Marion Leigh and Virginia (Morgan) Whitney. He moved to Central Florida from Massachusetts in 1978 and was a member of First Baptist Church of Central Florida. He was employed as a Quality Assurance Manager in the Aerospace Industry and later was an Account Executive at Philip Crosby Associates. He spent many years serving Christ as a Deacon, Bible study teacher and numerous other areas of service. Leigh leaves to cherish his memory, his wife of 56 years, Billie (Gray) Whitney of Orlando; three daughters, Cheryl Harmon and husband Glenn of Melbourne, B.J. Zubli and husband Pete of Gotha, Ginny Michalski and husband Jim of Jacksonville, FL; four sons, Jim Whitney and wife Kathy of Hudson, NH, Rick Whitney and wife May of Ocoee, Tom Whitney and wife Sarah of Clermont, Dave Whitney and wife Brittany of Winter Garden, FL; brother, Rev. Norman Whitney of Graham, NC; 23 grandchildren and 11 great-grandchildren. The family will be receiving friends from 2-3p on Saturday, August 22, 2009 at First Baptist Church of Central Florida followed by the service at 3:00 p.m. with Rev. Dexter Johnson officiating. A private interment will be held at Winter Garden Cemetery. In lieu of flowers donations can be made to the National Kidney Foundation.
Posted by Dobbs Funeral Home Obituaries at 8:03 AM