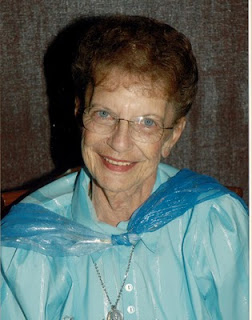 Mrs. Barbara A. Hogan, 76 of Deltona, passed away on Saturday, February 13, 2010 at Florida Hospital Fish Memorial. Barbara was born in Detroit, Michigan, the daughter of the late Leo and Anna Mytkowski) Lademan. She retired as a secretary in the county permitting office. Barbara leaves to cherish her memory, husband John Hogan of Deltona; two daughters, Sheila Collar and Lisa Adams of Deltona; son-in laws, Keith Williams and Jeffrey Adams; she is also survived by grandchildren, Laura Collar and Melissa Williams of Orlando; great grandhcildren, Aliviana Cabrera of Deltona, Adriana Thillet, Davieon Williams and Darius Williams from Orlando; nieces Patty Malkoski of Matamora, Michigan and Sandy Bonello of Clinton Township, Michigan. A memorial service will be held on Thursday, February 18, 2010 at 2:00 PM at Dobbs Funeral Home with Brother Raymond Collar officiating.
Posted by Dobbs Funeral Home Obituaries at 1:48 PM

Lisa, I am so sorry to hear of your loss. May God continue to comfort you and our thoughts and prayers are with you.

Yes! Finally something about financial services.

Its like you read my mind! You appear to know a lot about this, like you wrote the book in it or something.
I think that you can do with a few pics to drive the message home a little bit,
but other than that, this is magnificent blog. An excellent read.

I'll certainly be back.

My family always say that I am wasting my time here at net, except I
know I am getting knowledge daily by reading thes fastidious articles or reviews.

Hi! I know this is kinda off topic however , I'd figured I'd ask.
Would you be interested in exchanging links or maybe guest authoring a blog
article or vice-versa? My website addresses a lot of the same topics as yours and I feel we could
greatly benefit from each other. If you happen to be interested feel free to send me an email.
I look forward to hearing from you! Fantastic blog by the way!

Do you have a spam problem on this website; I also am a blogger,
and I was curious about your situation;
we have created some nice procedures and we are looking to swap solutions with
others, be sure to shoot me an email if interested.

Hi, constantly i used to check weblog posts here in the early hours in the daylight,
as i like to learn more and more.

Hi there, this weekend is nice in support of me, because this
occasion i am reading this great educational piece of writing here at my house.