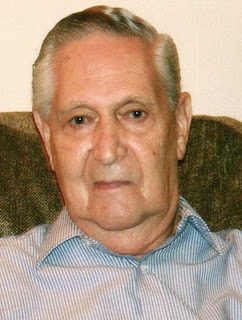 Frank G. Dragojevich, age 88 of Orlando passed away Tuesday, May 25th, 2010. Frank was born in Pittsburgh, PA the son of the late Dominick and Mary (Arena) Dragojevich. He is a US Marine Corp Veteran, was employed as a steel worker, and moved to Central Florida from Pennsylvania in 1977. He attend Holy Family Catholic Church in Orlando.
Frank leaves to cherish his memory, wife Margaret (Chizmar) Dragojevich of Orlando; two daughters, Lynn Estock of Columbus, Ohio, Deborah Capp of Orlando; son Greg Dragojevich of Orlando; 6 grandchildren, Steven Estock, David Estock, Nicholas Estock all from Columbus, Ohio, Ryan Capp and Ashley Capp both of Orlando and Abby Estock of Pittsburgh, Pennsylvania.
A Memorial service will be celebrated at Holy Family Catholic Church in Orlando at 11:00 AM on Tuesday, June 1st, 2010 with Father Kenny Aquino officiating.
Posted by Dobbs Funeral Home Obituaries at 10:19 AM

Rest in peace Grandpa, you will be missed. Semper Fi

I LOVE YOU GRANDPA!! I'LL SEE YOU AGAIN IN HEAVEN. TIL THEN I MISS YOU SOOO MUCH <3