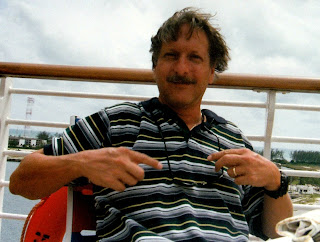 Thomas Peter Sharkey, age 54 of Apopka, Florida, passed away on Monday, October 31st, 2011. Thomas was born in Dayton, Ohio the son of Emily (Jones) and the late Thomas Palmer Sharkey. He was employed as Chief Photojournalist at WWSB-TV Channel 7 in Sarasota, and Photographer/Sports Photographer at WFTV Channel 9 in Orlando. He received the 2007 NPPA Region 6 Photojournalist of the year award and over 30 other national and regional awards including 8 Emmy awards. Thomas leaves to cherish his memory, mother Emily Sharkey of Dayton, Ohio; wife Vicki (Bienkowski) Sharkey of Apopka; three daughters, Erin (Matt) Fisher of Havlock, North Carolina; Rebecca Smith of Orlando; Jennifer Sharkey of Apopka; sister Barbara (Bob) Shook of Ohio; and grandson Brayden Fisher of Havlock, North Carolina. A memorial service will be held at 3:00 pm on Sunday, November 6th, 2011 at Dobbs Funeral Home with Pastor Thomas Hensley, officiating.
Posted by Dobbs Funeral Home Obituaries at 3:46 PM

I know the pain associated with death and I was saddened to hear that Thomas had passed away, but what helped bring comfort was to find that the Bible speaks of a time when death will be done away with: