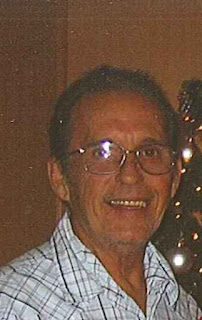 Danny Justus Burleson, age 61 passed away on July 21, 2012.  He was born in Detroit Michigan, the son of Justus Calvin and Betty (Heath) Burleson and served in the U.S. Army.  He was employed as a driver for a trucking company.  Danny leaves to cherish his memory wife Carol (Curtis) Burleson of Orlando; sons Paul Cartor of San Antonio texas, Gavin Burleston of Orlando; daughter Marie Burleson of Michigan; sisters Martha Kaitner and Carrie McCormick both of Ann Arbor and 4 grandchildren.

A Birthday Celebration will be held in his honor on Friday, July 27, 2012.  Interment will be at a later date at Florida National Cemetery in Bushnell, Florida.
Posted by Dobbs Funeral Home Obituaries at 4:10 PM

My condolences to the Burleson Family,

During this time of great sorrow, may it comfort you to know that others are deeply touched by your loss. I too know the pain of losing someone dear. Even though our hearts are broken, rest assure that our Grand Creator cares about you personally (1 Peter 5:7) and can help you through this difficult time.
Revelation 21:4 says "And he will wipe out every tear from their eyes, and death will be no more, neither will mourning nor outcry nor pain be anymore. The former things have passed away.” Soon God will do away with death forever, there will be no more sorrow, heartache, or pain. I hope this brings you a measure of comfort during this painful time.