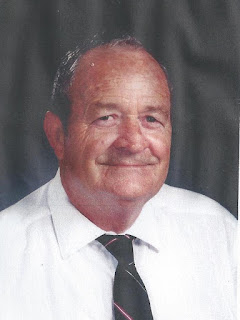 Bobby Delano Bass, age 78 of Orlando passed away on Wednesday, August 8th, 2012 at his home.  Bobby was born in Wilson, North Carolina the son of the late Samuel and Virginia (Whitley) Bass.  He served in the U.S. Army and was employed as an electrical engineer.


The family will be receiving friends at Dobbs Funeral Home from 6:00 until 8:00 pm on Monday, August 13th, 2012.  The funeral service will be held at the funeral home on Tuesday, August 14th, 2012 at 10:00 am with Pastor Jerry Forrest officiating.  Interment will be held at Highland Memorial Gardens.
Posted by Dobbs Funeral Home Obituaries at 10:13 AM

I love and miss you like crazy already dad. Its not the same with you not being here. Thank you for loving me and taking care of me and for always being for me! I will take care of mom until she joins you just as I promised you I would. Rest in Peace!

You were a wonderful husband,dad, grandpa and great grandpa- you leave many wonderful memories that will forever live in the hearts of those that you loved and loved you! You are at peace now and free from pain! Til you reunite with all your love ones rest in peace! You will be forever missed and remembered!! May God comfort those you have left behind as only He can. In His love Tammi Martin

Grandaddy....In my eyes, you are the greatest man in the world! Life will never be the same without you...

So heaven has received another angel
The night sky another star
Your life has become a loving memory
I know you will never be far.
I know you are watching over me and my girls
As my life goes on
I will treasure the memories I have of you
I cant believe your gone!
You were a loving caring grandaddy
You were there for me always
You will always hold a place in my heart
A loving treasured spot.
You were really one in a million
A cut above the rest
All that knew you would agree
You simply were the best.
So grandaddy I will say goodbye
I love and miss you with all my heart
But as long as I have my loving memories
We will never be too far apart.

Poppa, words can not express the pain i am feeling. We knew this day was coming but i was still not prepared to let you go and im still not. But i must, if i am to begin the next chapter in our lives, yours spending it in heaven with our loved ones and mine here on earth. You will ALWAYS be in my heart and will never be forgotten. I love you daddy....and now its your turn to enjoy things from up above finally free of all aches and pains.

Shana, my thoughts and prayers are with you my friend! I am praying that God will give you and your family the strength, peace and comfort to make it through the difficult days ahead. God Bless you all!!! Love and hugs!

Bob, rest in peace my friend. We were neigbors and friends for 22 years. There is alot of memories with happy times. We will all be together one day in heaven. I love you!!!!!!

Beth-Powers- your other daughter said...

Where do I begin. You were always there for me. Shana and I could always depend on you to get us out of trouble. So glad all your suffering is over with. Rest in peace and enjoy your time with all our love ones that are in heaven with you. Rest assure, Shana and Shelley will take care of Mom Annette for you. Then one day you will welcome her with loving arms to join you. I love you so much. My heart is so full of sweet memories. Thanks for all you did for me . Love, Beth

Rest in peace to my adopted Daddy Bob. I have known you since I was a child, your were the best Father figure I had in my life. I will miss your smile and that look you would give. You were the greatest Father, Grandpa, Husband, Brother, Uncle, and Friend. You will truly be missed, but I have my memories. I will see you again one day in heaven. Thank you for everything you have ever done for me. With my of my love.

I am so very sorry for the loss of a husband, father, and grandfather. The pain of losing someone so treasured and loved is indescribable, and there are hardly any words for consolation. What if you had the chance to see him again though? The Bible promises in Acts 24:15 that “there is going to be a resurrection of both the righteous and the unrighteous.” Jehovah God has made provisions so that we can see our beloved ones who have passed away and enjoy everlasting life in a paradise with them (Romans 6:23). I hope to know what the future holds, comes as a consolation and hope to your family.

Feel free to e-mail me if you would like to discuss more at nmijares92@gmail.com.

I will miss you forever (Hell,I already do) but you will never ever be FORGOTTEN in my heart. Hey, Thanks for being my friend,advice man whatever you wanna call it but MOST of all my Grandaddy!!! I love you man.

Bob you were one of the finest men I have had the honor to know. You took on the responcibility of adopting 2 children that were not yours and raising them as your own. You were ahard worker never did anything halfway. You were a shineing example of how a man should be. I hope that I some how have lived up to your example. I will miss our boys days out. I will always be here to love and care for your daughter Shana. And we will care andtake care of your wife Annett as long as the Lord allows us to. Be in peace my friend. Your work is over. Go rest on that mountain. You earned it.

Your family loves you more than words can say. Now you watch them from Heaven and see and hear everything and know how loved you are by so many.