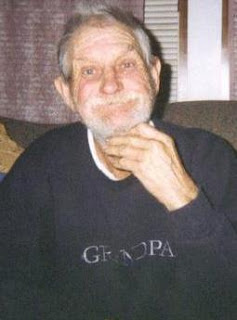 Roscoe Tucker, age 80 passed away on Friday, August 24th, 2012  in Summerfield, Florida.  Roscoe was born in Blue Creek, West Virginia, the son of James Andrew and Daisy (Miller) Tucker.  He was employed as a coal miner and moved to Central Florida from West Virginia in 1994.  He is predeceased by his sister Bessie Trent.
Roscoe leaves to cherish his memory sons Robert Tucke rof New Mexico, Roscoe Tucker of Orlando; daughters Barbara Ewing of Summerfield, Florida, Rosa Reynolds of Winter Springs, and Daisy Tucker of Orlando; 16 grandchildren and numerous great-grandchildren.
A graveside service will be held at Woodlawn Memorial Park Cemetery on Tuesday, August 28th, 2012 at 1:30 pm with Rev. Harvey Carpenter officiating..
Posted by Dobbs Funeral Home Obituaries at 4:00 PM

Thank you so much You did a great job raising 5 beautiful childern and beinging one great Daddy to us all.....we will Love and Miss you so much......REST IN PEACE MY SWEET DADDY WE LOVE YOU SO VERY MUCH.....YOUR DAUGHTER BARBARA SUE>3

I'm so sorry to hear about your father's passing. Grief can be so hard, but our special memories help us cope. We are thankful to God for the hope of the resurrection that He gave us. (John 5:28,29). It won't be long before we can receive our loved ones back, and I hope you find that encouraging. Your family is in our thoughts today and in the weeks ahead.