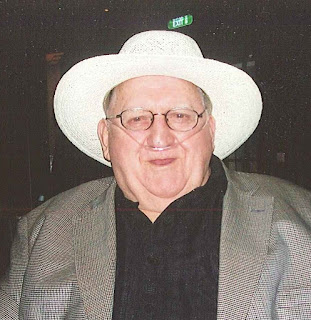 Russell Eugene Smith, age 80, of  Winter Park passed away May 9, 2013.    He  was born in Pittsburgh, PA the son of the late Marcella and James  Smith, the baby of six brothers and sisters. He served in the U.S. Army and was employed in construction as well as the foundry business.  Russell was a hard worker often working 2 jobs.  He always put his family first and thought of everyone else before himself.  When his first wife passed in 1973, Russell and his family lived in Florida, Washington State and Kentucky (his second wife's home state, Bobbie Jean) where he retired and continued to work in his own foundry business until his stroke in 2000.    Even after his stroke he found the will to continue working and eventually moved to Winter Park to live with his son Russy in March of 2011.
He loved country music, Jerry Clower, Hogan's Heroes, Colombo, playing slots at hard Rock in Tampa,  and hot soft pretzels at Daytona Beach.  It never took much to please him and the simple things made him happy.  Declared best dad and personal hero, he leaves to cherish his memory daughter Jill , son Russy, daughter Lindsey Smith; sisters Doris Justice, Virginia Smith and many grandchildren and great-grandchildren.    His son Russy states, "Dad always said never to make a fuss over him or shed a tear at his funeral.  Tears will be shed.  The world and us have lost a great man.  Let it be known and never taken for granted, there is never enough time with the ones you love."  The funeral service will be held at Dobbs Funeral Home on Wednesday, May 15, 2013 at 11:00 am followed by interment at Woodlawn Memorial Park.
Posted by Dobbs Funeral Home Obituaries at 3:40 PM

I am sorry to read of the passing of your love one. I pray you will be comforted by Jesus' words:"Do not marvel at this, the hour is coming when all those in the memorial tombs will hear his voice and come out."(John 5:28,29) Just imagine your joy of being reunited with your love one again when Jehovah God grants His Son, Jesus Christ the power of the resurrection; to raise those sleeping in death, back to life with the prospect of eternal life on the renewed paradise earth.-John 11:38-44; Luke 23:43. Until that wonderful blessing takes place; may God continue to comfort and bless the Smith Family.-Matthew 5:4.

I was saddened to hear that Russell had passed away, but what helped bring comfort was to find that the Bible speaks of a time when death will be done away with:

My daddy was the greatest man and father I could have ever asked for in this world .... He will always be the man I look up to and I know in Mt heart he will always be with me but it is never the same as having him here to walk me three this life of mine I wish there were words to explain my daddy but honestly there aren't enough words to express how great he really was . I love you daddy your always in my heart