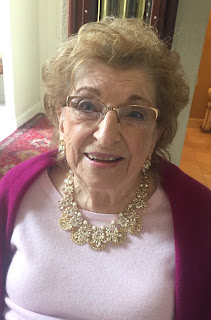 Regina Barbara Yuskoski Graeber passed unexpectedly in her peaceful sleep in Orlando, Florida on Thursday, March 23, 2017, at the age of 100 and a half.  Regina was born on September 15, 1916 in Mount Carmel, Pennsylvania, to grocery store owners (of 49 years) Edna & Louis Yuskoski. Regina witnessed in her early years a parade celebrating the end of World War I, a local speech by Thomas Edison, and survived the Great Depression.  She graduated from Mount Carmel High School in 1932 and married the (late) Robert Graeber Sr.  In 1940 she moved to Shamokin, Pennsylvania where she lived in the same house on the side of a mountain for 74 years, raising six children.  She is also survived by 12 grandchildren and 13 great grandchildren. Her family was blessed to have witnessed the 50th wedding anniversary celebration of Regina and Robert decades ago.

Regina was active in Shamokin community activities, including the choir of Mother Cabrini Church, Choraleers, the Polka Mass Choir, the St Edwards/ Mother Cabrini Church and Funeral Mass Choirs.  She was a devoted wife and mother and a prayerful devout Catholic all her life (she would make 7 lemon meringue pies at a time for church events).  She was also known for her fabulous garden which bloomed especially bright in the spring with daffodils, tulips, hyacinths and crocuses. The last 22 years of her life she called Shamokin, PA and also Orlando, FL home (to be more involved with family).  She even joined the church choir at Holy Family in Orlando.  Her love of music has inspired and touched family and friends for generations.  Regina started playing electric guitar at the age of 57!  In her final years she started painting and also did quite well!

Her 100th birthday celebration in September of 2016 brought her family together for a joyful centennial celebration of her life.  In her 100 years, Regina Graeber brought life and love to countless people, including her immediate family: her late husband, Robert Graeber Sr; daughter Barbara Braubitz (of Auburn, NY), and her three children and two grandchildren; daughter Margaret Combe Barstow (of Southlake, Texas) and her three children and seven grandchildren; daughter (late) Gloria Graeber; son Robert Graeber Jr. (of Lititz, PA) and his two children and one grandchild; son Bruce Graeber (of Washington, DC) and his two children; and daughter Laura Wideman (of Orlando, FL) and her four children and two grandchildren—and a baby on the way!

Even at 100 years old, Regina Graeber’s eyes sparkled to hear and tell stories and events about the lives of her children, grandchildren, and great grandchildren that were passed along through the “Graeber-vine.”  Regina didn’t miss a beat! She loved to share wisdom and family stories, past and present, and in her sweet sing-song Eastern accent would say, “Oh honey, I’ll tell ya…”  Regina is singing with the choir of angels now, and our loss is heaven’s gain!

Posted by Dobbs Funeral Home Obituaries at 9:24 AM