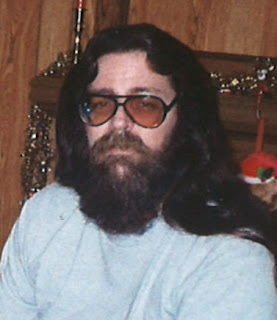 William Duane "Billy" Scott, age 53, of Orlando, passed away on Saturday, March 24, 2018.  A lifelong resident of Orlando he was the son of John Bogue Scott, Jr, and Bonnie Sue Hackworth Scott.   He graduated from Maynard Evans High School in Orlando (Class of 1982).  After high school he married his childhood sweetheart Cindy Huth, but they divorced some time after his accident.

Billy worked for the Operating Engineers, and later at Fred's Crane Service.  It was while working there, that he fell and broke his back, which left him a paraplegic and having to use a wheelchair the rest of his life.    Billy was always a very good mechanic, and loved his Harley Davidson  Motorcycles, as well as his cars.  He would help anyone he could with fixing their cars or motorcycles.   His mechanical aptitude dates back to when he was in high school where he had a Camaro, and then he built his 4 wheel drive pick-up both were his pride and joy.  His first Harley he got was after he was in a wheelchair, it came home and was a true basket case, as that is how he  brought it home.  He built it to where he could hand crank the motor and then proceeded with help of his dad to engineer the shifter to be able to ride it.  He won several awards for his bikes over the years.


Billy was preceded in death by both of his parents, a nephew Andrew Lee Scott, and step-father James Edward King.   Billy leaves to cherish his memory, brother Michael Scott (Lynn Waters-Scott) of Liberty, IL of Liberty, IL, Brother John B. Scott, III (Sandy Scott)  of West Branch, MI, a step-mother Debra Scott of Orlando, FL, and a nephew Jonathan Scott of Liberty, IL. , along with other relatives and friends.

Ride on Billy, your now free from that broken body you had and now can live on in eternity without the pain and struggles of that wheelchair. You beat the odds having survived for 31 years in that chair. Now enjoy the wind in your hair until we see each other again up there in the heavans. Watch down on Jonathan, and all your friends and help them when you can. One of these days we will be reunited! Give our love to all our relatives already there. God gave me two of the greatest brothers a person could have had, now I am one brother less! Rest pain free and in peace.

I miss you already and with your words of wisdom uncle Billy and will always keep you in my mind and will always remember you and dad keeping me on the straight and narrow to what my future has shown what is best for me to do more than what is best for me and becoming a mechanic mymyself and much moremore!!! And missing you and Andrew and much more!!!

May God give your family strength during this celebration of your life. You were always my 2nd protector in high school. Go ride high on that mountain your work on earth is done. Hug your momma real tight from me.
Love,
Teresa

Some of my fondest childhood memories are of the time we spent in Orlando and even though we lost touch you were never far from my thoughts and forever in my heart dear cousin. I send my deepest condolences and continued prayers for peace and comfort to the family and friends.

Billy, It was a good service at your house. I am sure that you were happy that all of the people that you were always there for in times of need & were always around when you needed them were there! We will see you on the other side my friend & neighbor!