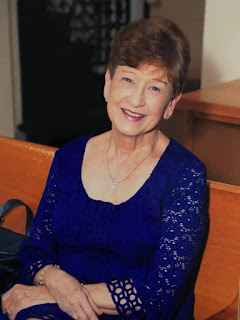 Judith “Judy” K. Greene, 74, of Brandon, FL passed away on Friday, April 30, 2021.  She is survived by her children Tracy Greene, Travis and wife Karin Greene, Trenton and wife Courtney Greene, four grandchildren Tyler, Logan, Bennett and Charlotte, her sister Janice Rushing, her brother Jeff and wife Jane Wilson, and many beloved nieces and a nephew.  She was preceded in death by her husband, Roger P. Greene in 2009, her parents Claude Olan and Vivian Maxine Wilson, and her brother, Jay Wilson.

A memorial service will be held on Saturday, May 8th at 2:00pm at Bell Shoals Baptist Church, 2102 Bell Shoals Rd, Brandon, FL, 33511, in the Multipurpose Room (original worship center).

Judith Kay Wilson was born on June 29, 1946 in Aransas Pass, Texas but was raised in Grand Isle, Louisiana, a close-knit community of oilfield workers and their families. She married her high school sweetheart, Roger, in 1969 after graduating from Louisiana State University (LSU) with a Bachelor of Science Degree in history. They then began their love affair with big game fishing. Although she served as a teacher in New Orleans, they spent much of their summers pursuing blue marlin and sailfish in tournaments in the Bahamas, Mexico, the Virgin Islands, Hawaii, and the south pass of the Mississippi River.

After their twins graduated from high school, Roger and Judy moved to Florida, settling in Key West where she served with the Department of Children and Families and with the 16th Judicial Circuit Court as an Operations Manager/Emergency Coordinating Officer. She volunteered for many organizations while in the Keys, including the United Way.

Retiring in 2008 and moving to Brandon, FL, she spent much of her time with her beloved Bell Shoals Baptist Church family in the choir, in the Shepherd’s Ministry and in serving others.  If desired, friends may make memorial contributions to the United Way of Collier and the Keys, P.O. Box 2143, Key West, FL 33045, or by going to their website at www.keysunitedway.org.

I am going to miss you Judy. So many wonderful memories we shared with you and a Roger fishing all over the world. Kids you have my deepest sympathy but I know your parents are together at last and probably big game fishin