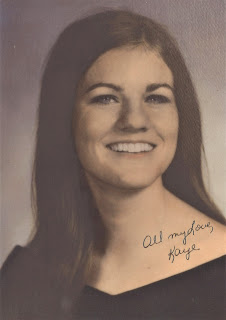 Margaret "Kaye" (Huston) Swatts, Born 02-19-1951 to Lonnie and Lois Huston, at Camp Atterberry, In.  One of the most loving and beautiful blue eyed angels on earth, was called to be with the Lord on 05-20-2022.  She moved around from several Army posts with her parents, including, Alaska, before settling down at Fort Rucker in southern Alabama, where she met her future husband, Lt. Roy "Dana" Swatts.  Kaye graduated, with honors, from Carrol High School in Ozark, Al.  She attended the LDS business college in Salt Lake City, Utah, where she earned a degree as an executive secretary.  Kaye came back to Alabama and had a formal military wedding to then Capt. Swatts.  Their duty station was Fort Bragg, NC, until he got out of the Army.

They moved to Ft, Lauderdale, Fl, when Dana became a Florida State Trooper and she worked for Bennet Community Hospital.  After eight years, they moved to Cross City, Fl.  There Kaye worked for the Suwannee Lumber Company, where she worked  as a secretary and bookkeeper.  5 years later they moved to Orlando where she resided until her passing.  Kaye worked with the Orange County School Board and retired as a para legal.  Other than her immediate family, most of her extended family lived in western Montana.  They eventually bought some land and a mountain cabin in Montana, where she spent many summer months enjoying life there.  Hiking and camping wherever she was, exploring across the country for new adventures or fishing was always something she looked forward to every year.

Kaye loved children and was very active in numerous positions in the several LDS churches she attended.  However, teaching the children was her passion.  Kaye was a cub scout den mother and later became a 4 H club leader.  She was an outstanding seamstress sewing many bridesmaid dresses, plus a very good cook, making sure her family and any visitors had excellent meals.  Kaye was a wife and mother that was and always will be deeply loved for her generosity and compassion to everyone.  She had a heart and soul of pure gold that cannot be replaced.

A private service for the family will be held at Florida National Cemetery in Bushnell.  In lieu of flowers or other donations, please make donations in the name of Margaret "Kaye" Swatts, to the Strive Senior Assisted Living of Fern Park, 7255 Strive Place, Fern Park, Fl 32730 or the Hospice of Central Florida (407-267-7286), for all of the loving and compassionate care they provided her.

We are so sorry to hear of her passing. Please give our best to the family. My husband Dave was Scoutmasrer of the Boy Scout troop by their home.