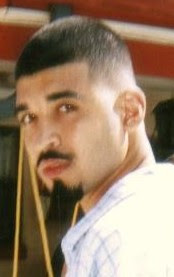 Luis Michael Gabriel, age 28 of Orlando, passed away peacefully on July 28, 2009. He was born February 3, 1981 in Bridgeport, Connecticut and relocated to Florida in 1991. He was employed by Behr Distribution Center in Orlando, Florida. Luis leaves to cherish his memory, his parents, Nilsa and David Dorbat of Orlando; his children, Evan Luis Gabriel, 3 years old and Arianna Gabriel, 4 months old, both of Orlando, Florida; brothers, Dave Lee Dorbat, Charlie Matthew Dorbat and David Dorbat Jr.; one sister, Jessica Luz Dorbat of Deltona, Florida; maternal grandmother, Maria Arroyo and many aunts, uncles and cousins. Luis loved being a D.J., skateboarding, fishing, playing his guitars, playing dominos, sketching and he totally enjoyed horror movies. He was a free spirit and was active and always on the go. He will be greatly missed by many. The family will be receiving friends from 6:00 – 8:00 PM on Monday, August 3, 2009 at Dobbs Funeral Home. The funeral service will be held at 1:00 PM on Tuesday, August 4, 2009 at Faith Assembly of God, located at 2008 N. Goldenrod in Orlando with Pastor Phil Waisanen officiating. Interment will follow the funeral service at Greenwood Cemetery.
Posted by Dobbs Funeral Home Obituaries at 4:13 PM

I smile when I think of the great memories we had during the past 28 years and they will be everlastingly cherished. Luis, you will be missed without end and forever in my heart. I love you!

Luis,I will always have you in my heart. You are Resting In Peace and not suffering anymore. I sometimes look up and picture the smirk on your face you once carried... You were so quite and not much of a talker but your smirk said it all. (smiling) I will miss you so much and playing Dominos you will always be on my side (spiritually)... Love you Cousin Always... Rosie

Poti,
I will forever miss you. I lost a brother and my life will never be the same without you, but I will definitely keep your memories alive. You hold a very big space in my heart and that will never change. I ♥love♥ you forever! Your cousin Jess...(I can still hear you calling my name)☼God Bless You☼ and May you Rest In Peace.☼

Luis, You were always like a son to me, since you were always such a big part of our lives. You and my sons always had me laughing with all your sillyness. I just want you to know that you will always hold that special spot in my heart. Rest in peace. Titi will see you again someday. So until then, I Love You and I will Miss YOU with all my HEART! Titi Elsa

P.s i will always be there for your mom even tho theres distance im always going to be here for her. R.i.p My Little Man.

If only life was not so short!! But, God has given you 28 years of life on this earth and gave me the opportunity of having a wonderful cousin like you and I thank him! We are very very sad to lose another loved one in our family. We will cherish every moment and never forget the great memories that we had together. Until we see you again, we will miss you..We love you...
LOURDES & GREG

Luis, you will be greatly missed by many people. It was a joy to know you. You have left behind many wonderful memories with your family and you will forever live in their hearts. God Bless you!

We appreciate the way God had placed you in our lives; even if it was for a short period of time. This experience has taught us that life must be cherished each waking moment and we are to display our lives with love, forgiveness, grace, and mercy. Your legacy will always be in our hearts.
We love you... God bless,

Luis may you rest in peace, God Bless your family and give them strength during this difficult time.

My thoughts and Prayers are with the family.

In Hebrews 12:22-24, the Apostle Paul describes what believers come to in this way. How much more true for those who have entered Heaven!
"...you are come unto Mt. Zion, and unto the city of the living God, the heavenly Jerusalem, and to an innumberable company of angels,to the general assembly and church of the firstborn, which are written in heaven, and to God the Judge of all,and to the spirits of just men made perfect, and to Jesus the mediator of the new covenant, and to the blood of sprinkling, which speaketh of better things than that of Abel." May God comfort your family and give strength and healing for the time to come.

Luis,(Poti) you were a amazing person with so many different talents! You will always be in my heart forever, and greatly miss by all of us! You are not suffering anymore and i know you will be a Guardian Angel up in Heaven shining and keep everyone safe!

Luis(Poti),
For the little bit of time I known you, it was a great pleasure meeting you. Your cousin Eddie Jr. told me alot of stories about you. I know he will deeply miss you alot,too. We will always have you in our hearts. And we will always be there for your parents, brothers, Evan & Arianna. R.I.P.
Eddie Jr. & Patty

Luis, You were taken from this earth way too soon, but God must have had a greater need for you in heaven. We take solace in the fact that you will be a guardian angel to your children and family and that your memeory will live on forever in those that love you. We love you and you will be dearly missed. Love, Anthony, Damiana and Kaylib

I am deeply sorrow for the loss of Luis, your family will be in my thoughts. Try to remember the good times that you shared as it will help to cope with this terrible tragedy. --Kyle S.

Miracel - I am so sorry for your loss, your family and friends will be in my thoughts and prayers. Please let me know if there is anything I can do.
Sincerely - Tracy Milliman

WOW CUZO I MET U ONLII ONCE AND I WAS A BABII ..U WILL DEFINATLEY BE MISSED MY CONDOLENCES TO UR POPS IS MY CUZIN UCHO ...IM LOOKIN TO MEET THE REST OF MY GABRIEL FAMILY U WILL TRULY BE MISSED .. LOVE JASON GABRIEL JACKIE GABRIEL (MOM) JANNETTE GABRIEL MY SIS GRANDMA NORMA GABRIEL AND GRANDPA MIGUEL GABRIEL YOU CANT CONTACT ME THRU EMAIL JADANIKA@YAHOO.COM PLEASE CONTACT ME

Yes exactly, in some moments I can say that I agree with you, but you may be in the light of other options.
to the article there is quiet a definitely as you did in the downgrade publication of this solicitation www.google.com/ie?as_q=solid converter pdf pro 3.1 ?
I noticed the utter you suffer with not used. Or you use the black methods of promotion of the resource. I have a week and do necheg

wow im speechless,, i goggle your name to find a old great friend,,, to see your picture in a obituary fill my heart will sorrow so many memories,, rip my dear and first friend!!!