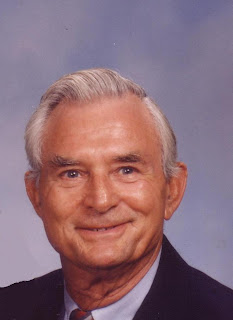 Born to Earl and Nellie Anderson Williams in Radford, Virginia, one of 8 children. Survivors include his wife Barbara, daughter Susan Klingensmith, sons James & Fred Williams, several grandchildren, nieces and nephews. Surviving siblings are Harry (Barbara), Dan (Elaine), Nancy, and Peggy (William). A veteran of the U.S. Navy, he served during World War II the Korean conflict. A former member of the Board of the Orlando Union Rescue Mission, an active member of the Gideon's International Jail Ministry and teaching Sunday School at First Baptist Church of Central Florida fulfilled his passion for sharing the Good News.

The funeral service will be held at 11:00 am Saturday, October 16th, 2010 at the First Baptist Church of Central Florida, 700 Good Homes Road, Orlando. Viewing is scheduled from 10:00 to 11:00 am prior to the service. A graveside service will follow at Woodlawn Memorial park, Gotha. In lieu of flowers, memorials can be made using the Gideon Memorial Bible Plan.
Posted by Dobbs Funeral Home Obituaries at 3:57 PM

Fred was my Gideon mentor. He was always available when you needed a helping hand. Always had a very positive outlook. He will miss distributing scriptures in heaven!