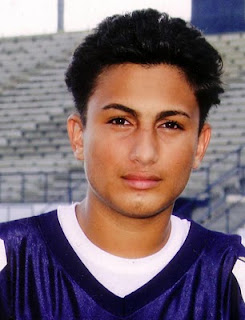 Words cannot describe the Loss felt of such a Bright Star. To The family, who have exhibited all the things that Anthony Said he had, Mental Strength, Perseverance, Compassion and the Will to go on in his HONOR, I extend my deepest sympathy. I am here for you today, tomorrow and ALWAYS..

Well Anthony u made on the Best team that anyone will want to be on. Your family is GREAT and i have strong Faith that u r looking down from heaven with a big smile on that face. Look out for Miguel he is gonna need u and in due time ur parents will need u also. Your a stong minded young man but that doesnt suprise me because i know the two amazing people that raised u. So shine some light on them because ur family is one of the strongest families im blessed to have a good relationship with. Well my lil G until next time we love u ......MANNY

My heartfelt condolences to the family and friends of Anthony; I am so sorry for your loss. Anthony was a good young man, and a role model for others. All of us, his teachers, administrators, counselors, staff and students at Union Park Middle School loved him very much.

This Is Still A Shocker To Me i Feel Like it's Just a Nightmare. But It Hurts Because I Cant Wake Up From This Horible Dream. Anthony Was Such A Bright Kid , When Ever You Neeed Him He Was There.He Knew How To Cheer You Up. I Remember In 6th Grade How He Would Always Make Me Laugh And Allways Tease Me And Miguel:)<3& I Know How Crushed His Family Is Right Now But I Strongly Believe That He Watchin Down On All Of Us And Especialy His Beautiful Strong Family . He Wants Us To Remeber The Good Times Not The Bad Ones Becuase Now He Is An Angel Sent From Heaven To Watch Over Us He Is In Better Place Now .. Ilove You ANTHONY ALI RODRIGUEZ.10-28-95 TO11-4-10 Wil Always B Remembered
-Sandy Loves You:)

My condolensces to the family of Anthony Rodriguez. I didn't know your son, but I have heard what a wonderful child he was and that only shows what type of family he came from. I am deeply sorry for your loss and may he Rest in Peace. God Bless you all and pray that you have the strength to carry on.

To the Family/Friends of Anthony:
I never had the opportunity to know your son, but I would like to extend my condolences to you. Hearing this on the news just tore my heart out as I used to teach for OCPS and dearly love the children. Now, being a LEO, I can only hope that your family will get justice. May your family, somehow, find peace again. Rest in sweet heavenly peace, Anthony.

There are no words to use to soothe your pain. The loss of a child is never something we get over. Anthony was a wonderful kid and a good friend. My son enjoyed playing with him and always had nice things to say about him.

You are all a strong family with strong bonds. I have seen you through the years and your strength will be there now to hold each other up.

Anthony was a unique and wonderful young man and we are all blessed for having known him and sharing our lives and our children with him.

We extend our sympathies to each and everyone of you. We are here for you - Monica, Cesar, Al, Ari - our hearts bleed with yours today.

My son Christian adored your son. The night before this happened they both said "I love you bro" to each other. I believe he has been assigned to my son as an Angel...and hope he can make life a little easier for him. My heart goes out to you Jessica and George and our home is open to you and your family any time just to cry, talk, and enjoy the memories our boys shared together...

Anthony; you will be with all of us forever, help your family with strength that is so needed. Love all you guys we are here anything you need.
Love Donnie & Sara Mason

Anthony,to not be able to hear your voice or to give you a hug kills me. You were a great kid, a son any parent would be proud of. Now that your gone I ask one thing of you and that is to guide my son Will, one of your best friends, in everything that he does. We love you and miss you very much. To Jessica and George im so very sorry this had to happen to good people like you, you have always taken care of Will as your own and I appreciate you more than you will ever know. My son is your son, my home your home, and my friendship is always here for you. thankyou for everything and I thank God for giving me and my family the oppotunity to know and love your son. RIP Anthony

Dear Rodriguez family,
I am so sorry for you loss and standing with your family in prayer. I work with Lydia Rodriguez at the Orlando Airport and we are all praying for your strength in this time of great sorrow. I pray justice will be done and you and your family find the peace of God and allow him to flood your soul. Trust in the Great I am and remember He is always there to call upon so call Him and He will give you the strength you need.

fear not, for I am with you;
be not dismayed, for I am your God;
I will strengthen you, I will help you,
I will uphold you with my righteous right hand.
—Isaiah 41:10

Anthony we were close a while ago you were one of th eboys words cant explain how much you will be missed & i wish i could be there with miguel. Get well soon & keep your head up

Hello, you site is very funny he told me to cheer up .. Merry Christmas.

Anthony, you were a real inspiring kid with lots of potential. Finally a mature middle school-er in my mind (when you were in my class last year). I think about what happened to you if not daily, weekly. I'm sorry. God bless you and your family my boy. Mr. Jones.

I really liked your article.


I have read a few of the articles on your website now, and I really like your style of blogging.

I didn’t know you or Miguel as well as I would’ve liked. But I remember you and your kindness toward me, even when most others were inclined to be mean to me. You remained kind. I know I’m posting this almost a decade late. But I got to thinking about you and your brother recently. I wish I had the opportunity of knowing you better. And I’m so sorry this happened. God bless your family. Rest easy.