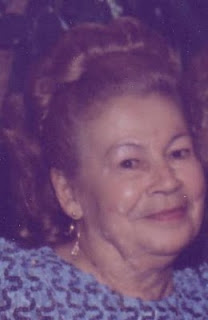 Mercedes Lopez, age 91 of Orlando, passed away Thursday, December 9th, 2010. Mercedes was born in Utaudo, Puerto Rico, the daughter of the late S. Isabel Segunda Soto Major and Dionicio Lopez. She was a homemaker and a member of St. Andrew Catholic Church.

The family will be receiving friends on Sunday, December 12th, 2010 from 4 until 7 pm at Dobbs Funeral Home. The Mass of Christian Burial will be held on Monday, December 13th, 2010 at St. Andrew Catholic Church at 10:00 am with Father Joseph Bellerive officiating, followed by interment at Dr. Phillips Cemetery.
Posted by Dobbs Funeral Home Obituaries at 3:32 PM

was saddened to hear that Mercedes had passed away, but what helped bring comfort was to find that the Bible speaks of a time when death will be done away with: