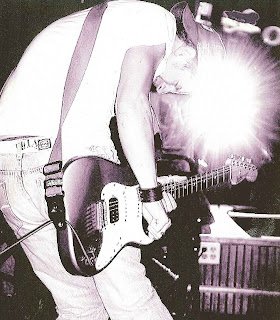 Aaron Francis Winter, age 34 of Windermere, Florida passed away on Thursday, June 23rd, 2011. Aaron was born in San Diego, California the son of Erich and Alice (Lynch) Winter. He was employed as restaurant manager. Aaron was also the drummer and lead singer for the band "7 Minutes Later". Aaron is survived by his wife Tracy (Pagano) Winter of Windermere; sons Ryan, Patrick and Joshua Witner; step son, Jacob McGlothlin and MacKenzie McGlothlin. The family will be receiving friends from 1:00 - 2:00 pm on Monday, June 27, 2011 at Dobbs Funeral Home followed by a Mass of Christian Burial at 2:00 pm with Father Kenny Acquino officiating.
Posted by Dobbs Funeral Home Obituaries at 3:46 PM

Though we are far away.... we are still there with you. Words can not describe the pain we are feeling in our hearts for his family. We will never ever forget that great laugh or how he would always say "ciao" at the end of our calls. We love you all very much and just know we are here for you always. Love,
Reggie and Teresa

Aaron let me sing and that made my day - I won't forget it :) Love to Tracy, the kids, and all the Winters at this unimaginably sad time. If you need anything, we're just a phone call away.

Aaron will be sorely missed,he touched so many lives with his spirt. Words simply cannot describe the hole left in our lives now. Tracy we are here for you if you need anything,
Rebecca and Pat

Aaron was a wonderful spirit whose soul will live on in all of us. May God bless his family left behind; especially Jenifer and boys she now has to raise alone. The entire family are in our prayers during this great loss. May God bless you all.

Death hopefully brings all together and that all anger and hatred from the pain offers only love for the most important lives left behind in this scenario - the children. I pray for strength for the mothers left to console the mystery that this will leave in their young and innocent minds.

Truly a loss... all I can do is pray that Jen can help her precious boys through this grief and the pain that will follow for many years to come. Jen you are in our prayers and thoughts. You are a wonderful mother and you have been left behind with gods true blessing, your boys.

Aaron your death is unfortunate... but the true tragedy lies within the mind's of the three boy's you left behind!!!