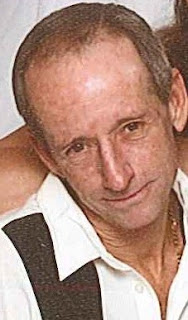 Johnny Basil McLeod, age 53, of  Apopka, FL passed away Tuesday, July 9th, 2013 at Florida Hospital Orlando, Orlando.   Johnny was born in Orlando, FL  the son of the late Maryann (Barber)  and Jordan  McLeod.  He was employed as a construction foreman.
Johnny leaves to cherish his memory, wife Bonita  (Dozier)  McLeod of Apopka ;  two daughters, Sheila McLeod, of Apopka; Michelle McLeod, of Apopka; a son,Daniel Dozier, of Minnesota;  brother, Joseph McLeod, of Apopka and grandchildren Jayden Roger and Ciera McLeod of Apopka.
The family will be receiving friends at Dobbs Funeral Home on Saturday, July 13, 2013 from 2:00 until 3:00 pm, followed by the service at 3:00 pm with Pastor Thomas Hensley officiating.
Posted by Dobbs Funeral Home Obituaries at 2:48 PM

I would like to express my sincere sympathy for the passing of your loved one. I hope you will find comfort in Jesus' promise of the earthly resurrection(Acts 24:15)when the dead will be raised up and restored back to life, with the prospect of eternal life, on the renewed Paradise earth.-John 5:28,29.

I know the pain associated with death and I w
saddened to hear that Clara had passed awa
what helped bring comfort was to find that the
speaks of a time when death will be done aw
with:

Isa. 25:8, 9: “He will actually swallow up deat
forever, and the Sovereign Lord Jehovah will
certainly wipe the tears from all faces. . . . And
that day one will certainly say: ‘Look! This is o
God. We have hoped in him, and he will save
This is Jehovah. We have hoped in him. Let u
joyful and rejoice in the salvation by him.’”

I know you will still experience pain, grief, an
sorrow but I hope that these scriptures will bri
some measure of comfort to you.