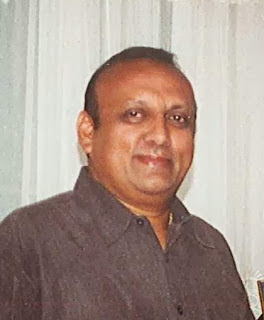 Harry Narine Panday, age 64 of  Orlando, FL, passed away Monday, December 9th, 2013 at Dr. P. Phillips Hospital.   He was born in Mahaica, Guyana,  the son of Basdiaya (Maraj) and the late Kanta Persaud.  He moved to Central Florida from Toronto in 1990 and was employed as a musician.
Harry leaves to cherish his memory, mother Basdiaya Persaud of Orlando; wife Savitri (Kalladeen) Panday of Orlando; two daughters, Petula  (Rajen) Indar of Orlando, Praveeta (Navin) Singh of New York;  son Krishna Desh Panday of Orlando;  sister Kamla Hansraj of Orlando; three brothers Onkar Persaud, Visanu Persaud both of Orlando,   Jotis Persaud of New York; and 4 grandchildren, Raj, Amaiya, Nyah,  and Marisa.
The family will be receiving friends on from 7:00 until 9:00 pm at Dobbs Funeral Home on Thursday, December 12, 2013.  A traditional Hindu service will be held from 9:00 until 11:00 am on Friday, December 13, 2013 at Dobbs Funeral Home followed by cremation at Metro Crematory in Ocoee at 11:30 am.
Posted by Dobbs Funeral Home Obituaries at 9:51 AM

Thinking of you all, and praying for eternal peace for dear Uncle Harry's soul. Sending all our love and deepest condolences. - The Laurent and Mehra Families, Toronto

Savitri I'm thinking about you and praying God gives you the strength to hang in there taking one day at a time.God will see you through.

Savitri I'm thinking about you and praying God gives you the strength to hang in there taking one day at a time.God will see you through.

I am so sorry to hear about the death of Panday as I always call him or knew him by. I knew Panday since age 12 wearing his yelllow kurta and white dhoti with brown leather brief-case in left hand and peddling his father's bicycle to perform a Ghandi in Grove Scheme. Although he was my senior our meetings were brief but yet allowed us to develop a friendship and a long lasting relationship (also with his sibblings)built on mutual understanding and respect. During the time I knew Panday I can surely say that he was very open, tolerant and friedly and showed a willingness to help others, he was never a selfish guy, he was bright and musically talented...a gift that GOD gave him which others may envy but he threw it all away and thus prevented him from being a great singer as Mukesh or Rafi. Had Panday stayed focus and persevere he would done well in his musical career. I cannot help to belabor the point...PANDAY was indeed musically talented. Among other qualities, Panday was always humble, he met you with a sincere smile or greeting and was accommodating,he was a pleasure to meet and to have a conversation with for he was quite articulate and charismatic. One caveat on this, Panday was never good at playing "bumper ball" or cricket but love the sport dearly even though I always put a trashing on him but yet respected my cricket talent that helped to cement our friendship. My sincere and heart felt condolences go to his immediate and extended family. How can I forget Panday?