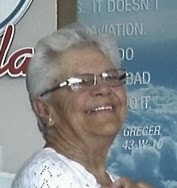 Muriel A. Kurz age 91, of  Oviedo, FL passed away Thursday, January 30th, 2014 at Hospice of the Comforter in Altamonte Springs.   Muriel was born in New Bedford, MA the a daughter of the late Grace (Moreau)  and Edmond  Collins.  She served in the U.S. Navy and was employed as a seamstress in the fashion industry.
Muriel  leaves to cherish her memory four daughters, Carolyn (Andy) Stefaniw of Daytona, Lori Miller of Avon, CT, Theresa (Don) Carter of Longwood, FL, Renee (Carlos) Flores of Altamonte Springs; three sons Mark Chmielewski of Bloomfield, CT, Roy Chmielewski of Waterbury, VT, Michael (Vanusa) Chmielewski of Winter Park, FL; sister Pauline Sweeney of St. Daytona; 14 grandchildren, and 14 great-grandchildren.
A Mass of Christian Burial will be held at Blessed Sacrament Catholic Church in Clermont, FL, at 12:00p on Friday, February 7, 2014 with Father Robert Webster officiating. Interment will be held at 2:30 pm at  Florida National Cemetery in Bushnell, FL.
Posted by Dobbs Funeral Home Obituaries at 1:55 PM


I am sorry for the passing of your loved one; please accept my sincere sympathy. While you are
grieving your loss, I hope you can find some comfort in Jesus’ promise of the resurrection(Acts
24:15) when those who have fallen asleep in death, will be raised up and restored back to life, with
the hope of eternal life, on the renewed Paradise earth.-John 5:28,29; Luke 23:43. Until that blessed promise is fulfilled and you are reunited with your loved one again, may Jehovah God grant you peace and comfort now, during this time of sorrow.-Matthew 5:4.

I'm so sorry for your loss! In these times of deep sorrow God's word provides so much comfort. Revelation 21:4 promises a time when pain and sorrow will be of the past. I hope that it gives you as much comfort as it has me in these difficult times.