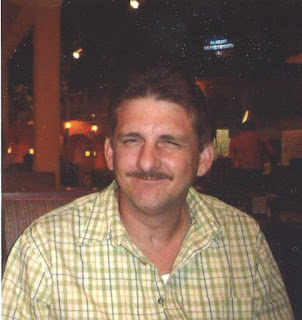 Gary Michael Dickson, Jr. age 44 of Mims, Florida passed away June 6, 2015.  He was born in Passaic, New Jersey the son of Gary Michael and Gail (Hnatt) Dickson, Sr.  Gary was employed as an auto mechanic.

Gary leaves to cherish his memory along with his parents,  daughter Courtney Dickson of Dothan, Alabama; sister Kimberly Ferizolli of Georgia and 2 grandchildren.

In Loving Memory Of Gary
Don't grieve for me, for now I'm free; I'm following the path of God laid for me. I took His hand when I heard Him call, I turned away and left it all. I could not stay another day. To laugh, to love, to work ,or play. Tasks left undone must stay that way, I found that place at the close of day.

If my parting has left a void, Then fill it with remembered joy. A friendship shared, a laugh, a kiss; Ah yes, these, I too will miss. Be not burned with times of sorrow, I wish you the sunshine of tomorrow.

My life's been full, I savored much, Good friends, good times, a loved one's touch. Perhaps my time seemed all too brief; Don't lengthen it now with undue grief. Lift up your head and share with me, God wanted me now, He set me free.

God bless you for the memories! May now, rest in peace. God loves you!

To those I love and Those Who Love ME

When I am gone, release me, let me go, I have so many things to see and do You mustn't tie yourself to me with tears. Be happy that we had so many years.

I gave you my love, you can only guess how much you gave me in happiness. I thank you for the love you each shown . But, now it's time to traveled on alone.

So, grieve a while for me if grieve you must. Then let your grief be comfortable by trust . It's only for a while that we must part. So bless the memories within you heart

I won't be far away, for life goes on so if you need me, call and I will come through you can't see or touch me, I'll be near all of my love around you soft and clear.

And then, when you must come this way alone I'll greet you with a smile and welcome you home.