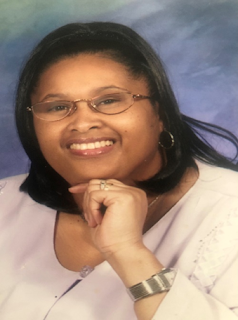 Juanne was born on February 13, 1963 in Saint James, Barbados to Alma and Neville Redman.  She migrated to Brooklyn, New York in 1971.  In 1981, she attended and graduated from Eli Whitney Vocational High School in Williamsburg, Brooklyn.  After graduating high school, she worked at Chemical Bank as a Secretary and was later promoted to Office Assistant.  She began her professional studies at LaGuardia Community College in Brooklyn, New York but changed course to begin a career in health care.  She attended Allens School of Health Sciences in Brooklyn, New York where she studied to be a Medical Assistant.  With this certification, she became a Medical Lab Assistant at New York Hospital in Manhattan, New York.  In 1990, Juanne relocated to Orlando, Florida, where she worked at the Florida Hospital as a Patient Financial Counselor until 2009 when she was unable to continue working due to her health.

In late 1990, Earle met Juanne in Orlando, Florida where both of their Mothers were friends.  Earle and Juanne fell in love and on May 19, 1992 Juanne and Earle were married.  Earle tells of a story of praying to God that Juanne would become his wife.  They became more than husband and wife; they were soulmates and a match made in heaven.  Juanne has left behind beautiful memories of a devoted wife, friend and a love story that is second to none.  Juanne and Earle were inseparable.  Whenever you saw or heard Juanne, you knew that Earle was right there in her presence.    As faith would have it, their first date was dinner and watching go karts race at an amusement park.  On Juanne’s last birthday a few weeks ago, Juanne and Earle reminisced their first date by having dinner and watching go karts race once again.

Juanne attended Faith Cathedral Worship Center with her Mother and Grandmother where she was very active.  After several years, she joined Fountain of Living Water Ministries where she was a member for over 20 years, and in 1999 she received her Certificate of License to preach the gospel, perform marriages, administer the sacraments and direct the other functions of the ministry. In 2010, Juanne was again honored with The Humanitarian and Pastoral Aide Award.

In addition, in October 2014, Juanne received a License as an Evangelist to “Preach the Gospel of Jesus Christ in accordance with the Holy Scriptures”.  She also received several plaques and trophies for her missionary work.

Juanne loved to sing and spent many days singing at home, while Earle, her beloved husband played the keyboard and trumpet.  She loved to travel and spent a lot of time on the Florida beaches.  She also enjoyed creating fond memories with family and friends.  She was a devoted Christian who would often be involved in many community activities, including outreach ministries and church events.

She was preceded in death by Alma A. Redman, her Mother.  Juanne Redman-Hall was 58 years of age when she died on March 5, 2021 at 9:27pm, at Advent Health Hospital, Orlando, Florida.

Calling hours are from 9:00a until 10:00a, followed by the funeral service at 10:00a on Saturday, March 13, 2021 at The Fountains of Living Water Ministries, Inc., located at 2200 Silver Star Road, Orlando FL with Pastor Daniel Malcolm officiating.  Interment will take place at Woodlawn Memorial Park Cemetery.

Until we meet again in the glorious city Rest in the Lord’s arm.

Sending love, condolences and prayers to the family for your loss. The Weeks family

Unforgettable, that's what you are
Unforgettable, though near or far
I will forever cherish you. Rest in
glory until we meet again. Give
Gran and Aunty Alma a kiss for
me. -Gail

Amazing cuz I ❤ you for ever , I still remember the time I went to church with you everyone thought we were sisters. I will miss our conversations and your wonderful laughter, you gave me strength when I needed it i miss you cuz ❤