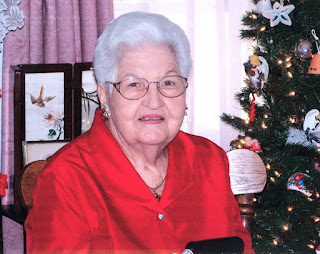 Mickey as she was known by all was born Oct. 2, 1920. She was One of 9 children. Mickey had two children, 5 grandchildren and 6 great grandchildren.  She was here with us for 101 years, not many people get to stay that long. What a life she lived and the things she saw. She graduated from Oviedo High and was salutatorian of her graduating class. After graduation she attend a business school in Tampa. While in Tampa she meets Carl Sokolitsky was married and had two children Gary and Carla. Her husband Carl was in the Air Force and was sent overseas. Mickey and children followed, Mickey told me stories of her and her sister’s trip from Orlando to California for their trip overseas to join her husband. The family spent time in the south pacific mainly Japan. After Carl retired from the Air Force and they moved back to Orlando Mickey lost her husband Carl a short time later, and she had to provide for her two children which of course she did. A few years later she meets James Hawthorne.  Mickey met James when she was working at the Orlando Vital Statistics office in Orlando. It got to be a joke with the other ladies that worked in the Vital Statistics. When James would come in for a death certificate, they would let Mickey know her Bow was here. A relationship blossomed and they were married. Once married Mickey helped James at Hawthorne Funeral Home. Mickey and James had a great life together until his passing. As always after his death Mickey carried on.

When I told my wife Carla, I would do the Eulogy for Mickey I thought back to the first time I meet her. From my every first time she struck me as a kind caring person. After have the pleasure of knowing her for almost 50 years that feeling and thought never changed. I never missed the chanced to set and talk with her. The conversation was always interesting. If you did not want a question honestly answered you should not have asked. Mickey never missed a chance to get the while family together. Every holiday was at her house there was always plenty of good food and good times with the family. I think her favorite was her annual Christmas party. Right after Thanksgiving lunched was cleared away up went the Christmas tree. That was the start of her getting things ready for her Christmas Party. Family and friends were all invited. It was a whole day of people coming in and out. Some people would be being their favorite dish for all to enjoy. Mickey just loved having everyone getting together and talking about what was going on or reminiscing about old times. It was always a good time for all, but no one enjoyed it more than Mickey.

On Mickey’s 100th birthday she was honored by the City of Oviedo. Oct. 2 2020 was proclaimed Mildred Hawthorne Day. That was due to the efforts of Katie her granddaughter and Katie’s personal connection with the Mayor of Oviedo. Katie put out the word to family friends and on social media all her 100-year-old grand-mother wanted was a birthday cards and she received a bunch.

I asked several people what word or words they would use to describe Mickey. I asked Kathy how would describe Mickey. Her word was welcoming. She automatically felt like part of the family. The other when I ask Jen what word she would use without much though her word was welcoming.  I heard thankful, honest, always wanting to help instead of being helped, caring & aperitive I heard the word love a lot as well. In all the time that I had the honor to know her I never heard anyone have a ill word to say.  We all know in our hearts that she is in a better place today in the presents of God surrounded by love and family.

A graveside service will be held at Woodlawn Memorial Park Cemetery on Thursday, October 21, 2021 at 11:00 am with Hospice Chaplain, Rev. Leslie McReady officiating.

Posted by Dobbs Funeral Home Obituaries at 11:56 AM