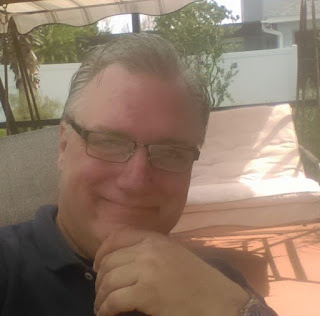 Robert Scott Springer, age 54 passed away on April 30, 2022 at Health Central Hospital in Ocoee.  He was born in Troy, New York, the son of Robert J. and Madelyn (Kapuscinski) Springer. Robert graduated from West Orange High School and Valencia Community College.  He was a certified paramedic and previously worked for Rural Metro Services.  He was also a news stringer who worked for Cross News.

Robert is survived by his daughter, Hannah Springer, his mother Madelyn (Madge) Springer, preceded in death by his father Robert J Springer, his sisters, Wendy S Springer, Tammy Marcotte and brother G. Timothy Springer. He is also survived by 5 nieces and nephews.

Hey Bob...I bought a star in your name knowing you are in heaven and shining bright!! Rest in peace.. 🕊️🕊️🕊️🕊️🕊️🕊️🕊️🕊️

My thoughts and prayers are with you Madge and your family. Lori and I send our love to you guys.

Truly sorry for your loss. Praying for peace and comfort. May your son rest on high.

Prayers go out to the family! Bob was so young, too young. Such a funny guy. Always making everyone laugh. Miss those high school dayz of chillin at The Springer house, relaxing on the beach, or running the halls of WOHS! May Bob’s memory last forever! Fly high, my friend!

Thank you Jerry. You and your brothers will always be a part of our family. Bobby loved the PH Boys Club and baseball. If my memory serves me right, didn’t you teach Bob & Tim how to drive? Blessings to you & Lori 💔

Bobby, you never met a stranger, your larger than life personality made you so likeable. You were loved by your family. I pray for your soul daily. Love you B.O.B 💔🌹🌻

Bob and i worked together for a good amount of time and we shared many laughs and stories. Bob never met a stranger. He spoke very highly of his family, i remember giving him rides home and him talking about his love for them and their importance in his life. Sending you all love.

I have so many fond memories of Bobby going all the way back to high school. He really was larger than life, always making me laugh. I am so sorry for your family. I know you are heartbroken. Sending lots of love your way.

Thanks John for thinking of us during this difficult time! We will keep in touch. ❣️💔

Hey dad,
I miss you so much. This doesn’t feel real but I know you’re at peace. I think about you every second of every day & I know your watching over me & everyone you loved. We have a lot of good memories I reflect on everyday. Thank you for being the best fishing buddy & teaching me how to play video games & ride a bike. My fav memory is probably when I was like 13 and you used to teach me how to drive your truck all around grandmas neighborhood. I love you dad and I wish things could’ve been different but I understand God knew it was your time. Please continue watching over me.
Love,
Munchkin, munch, munchie <3

(All you do is win win win no matter what.)
You are the best friend I ever had I miss you Bob.

You will forever be loved and missed. Everyone from your live-streaming apps will forever miss your humor and in my book all you do is win win win!!! LYF YOUR LIKEE FAMILY

I. So sorry just know u are loved and even tho u not here u will always be remember love in my heart bob u were the best dude alive 😭😭😭I will miss u I look uo to u as my own dad

Thank you for your kind words. Bob loved everyone. His larger than life personality and quick witt made him so likable.

Hey my condolences goes out to you. Bob and I went to the same school. How did this happen ? I mean we spoke a month ago. Nothing was wrong at the time. I am floored. Does anyone have the details I’d like to know so I could pay proper respects

Our love and prayers being sent to you all.
May God bless ✝️💟 and comfort you all during this time of sadness.
Bill and Carol Callahan

My deepest condolences. What I remember most about Bobby was his sense of humor. RIP my friend 🙏🏼🥺

Hey friend..BIG B !!! i miss you so much i wish i had a chance to say goodbye. your sweet spirit and funny personality will forever be missed. i think about you all the time. I Am really heart broken. but i know your in a better place now. love you forever and always. R.I.P B.O.B. Sending condolences to the family may you all be blessed and healed from this tragic loss.

Hannah, I don't believe we've ever met but if you're ever near Colonial/Hastings, in Pine Hills, please call n stop in for a prayer and a hug 🤗🤗( I am 2 streets up from St.Andrew). There's nothing anyone can say or do to take away this pain. Surrender all of it to God, let him carry it and you . PS your Daddy was my youngest brother's friend so growing up they were mostly pests to me and always needed rides somewhere. When I returned to Florida years later I had a party, in Pine Hills, but not on Baywood. Your Daddy, Grape, Graham St.John, Bobby Dye, and many others showed up not realizing I was a dispatcher at Orlando Police Dept and many of my guests were officers . Was a very 'interesting' party to say the least! After that tho Bobby was around quite a bit and I got to know him much better. He was always very sweet and inappropriate at the same time 😅😅!! I 'got' his sense of humor and cared for him dearly. I know he is resting in true peace.
321-217-7029
Any friend of Bobby's is welcome as well.

Bobby when I read this you were already gone by a couple weeks to a month. Absolutely couldn't believe it. I remember when we were young guns when you lived in Pebble Creek in Lake Mary about 15 to 17 years ago. Where'd the time go and why do these things have to happen to good folks. I just saw you within a week of your death and I would've said a couple more things and stayed with you longer had I known but you were always a good friend to me and I hope I was in return. Love ya bud. R.I.P. BOB