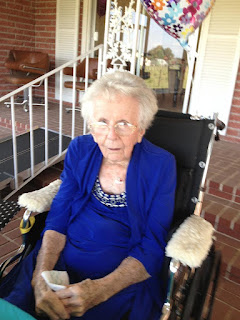 Mary Ethelda Simmerman, age 94 of Orlando, passed away on Saturday, August 15, 2015.  She was born in Hampton, South Carolina, the daughter of the late John Stephen and Ruby Viola (DeLoach) Keefe.  Mary was a homemaker and member of Sylvan Highlands Baptist Church in Orlando.

I am truly sorry to hear of the passing of your loved one, please accept my sincere condolences. I hope you will find some comfort and strength in Jesus promise of the earthly resurrection(Acts 24:15)and the renewed Paradise earth, where death will be no more and no family will mourn the death of a loved one.-Revelation 21:3,4;John 5:28,29;Luke 23:43. May GOD(Psalms 83:18)grant you peace and comfort now, during this grievous time.Matthew 5:4.

When my mother passes away in 2000... My grandmother was going into ICU. The doors opened so we could visit grandma. The nurse said " my name is Elaine" I knew from there my mother was watching over her. Brings me comfort to know they are finally united. I love you grandma. Truly one of Gods precious angels. Rest in paradise, forever loved and missed.

Shelly "Krantz" Banister...
Grandma I know that you are at peace, surrounded with the light of the Lord. I know Grandpa John has been waiting for you, so has Jeanine, and anyone else that I didn't know who passed. YOU are a child of God and Jesus has you, carrying you to the right side of paradise as promised.

Here is my fondest memory I have --- Sitting around your bed at night, listening to you read the bible to grandpa john one chapter at a time. It didn't matter how many of us grandkids where there, their we all were. To me that is when I felt love, peace, and safe.

I am so sorry you never met my youngest daughter, Ashley. But keep on the look out for another great grandchild. DOB is around 2-28/29-2016.

Grandma, I miss you as does everyone else. I know you knew that until the night you went home.

With love from your granddaughter Julie.