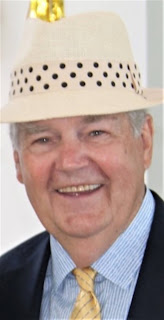 John Charles Rackers, II passed away on August 6, 2021 at the age of 85, in Orlando, Florida.  John had battled a serious illness for over a year and there were a number of times where his family thought they lost him.  But John always fought back, and always with a smile.  While God granted his family some borrowed time, He ultimately called John back home.

John was born on January 20, 1936, on a dairy farm in Jefferson City, Missouri, and grew up surrounded by a loving family.  Even before the rooster crowed, John would get up, get dressed, and work with his father (Poppy) - morning til night - milking the cows, feeding the chickens and pig, plowing, bailing hay, and generally tending to their 200+ acres.  He went to high school in Jeff City, where he played football and ran track.  John attended the University of Missouri and graduated in Civil Engineering.  With his work ethic from the farm, and an ethos from another era, he spent the next 40 years with the same company selling construction products.

John met the love of his life, Marlene, in Nassau, Bahamas at a Catholic Alumni Club retreat - the "CAC" or what Marlene ("Boo") thought John looked awfully handsome in his plaid Bermuda shorts and she was hooked.  They would marry, live first in Edina, Minnesota and then move to Atherton, California, where they raised three children.

John and Boo were married for 54 years.  John was devoted to Boo.  While not much of a cook, unless you liked your steaks well done, when Boo was recovering from knee surgery he cooked her pasta every night and made her pancakes every morning.  John was an amazing father.  Always the athlete, he coached his kids' soccer and baseball teams.  He taught them to golf, play tennis, and ski in Lake Tahoe, holding them steady between his legs, which had to be exhausting.  John was also an incredible grandfather.  He never missed a Baptism, First Communion, or graduation; and would travel the country at a moment's notice to spend time with his grandkids, even at a rain-soaked Michigan football game.  And John did it all with a smile and an infectious laugh.  No one remembers John saying a harsh word about anyone.  He was kind and welcoming, a pillar of his church and community, and always generous with his time and treasure.  John didn't have to know you to strike up a conversation, which he did often, sometimes to his family's embarrassment.  But that did not matter to John.  To him, everyone had worth and everyone had a story.

John loved his family, his church, his rose garden, and the family farm in Jeff City.  He loved watching sports, any sport really, but particularly his Golden State Warriors.  He loved John Denver, Harry Belafonte and Fiddler on the Roof, and singing (not always well) to their songs.  John loved to travel and he loved good food, especially vanilla ice cream with Baileys Irish Cream.  And John loved being spoiled by Boo.  In the end, while the hospital said no to the Baileys, John passed peacefully surrounded by his loving wife, his children and grandchildren, red roses , and John Denver's "Back Home Again" playing in the background as he journeyed home to heaven.

John will be honored at a funeral mass on August 20, 2021 at the Chapel of the Holy Family Catholic Church on 5125 S. Apopka Vineland Road in Orlando, Florida.  There will a biewing at noon, followed by the mass at 1:00 PM.

Posted by Dobbs Funeral Home Obituaries at 11:41 AM