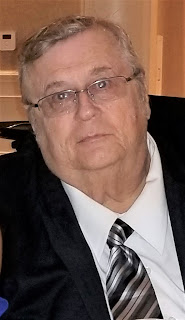 On September 7, 1972 he married Lenita Mellano at the US Embassy in the Philippines while serving as a Captain in the U.S. Navy (1969-1973) during the Vietnam war. Robert attended firefighting school, Assault Boat Coxswain School,  and the National Training Center for seaman, Petty Officer 3&2 class, Boatswain Mate 3&2. He was also trained in minelayers as an E-4, E-5.  He earned the National Defense Service Medal and Vietnam Service Medal with one Bronze Star.

Services will be provided by Dobbs Funeral Home on Wednesday, October 26, 2022 from 3-6 pm.  Viewing  is scheduled for 3pm-4:45pm; Memorial service will immediately follow. The address for the service is 430 North Kirkman Road, Orlando FL 32811.  The service will also be on Facebook live, at 4:30pm.

In lieu of flowers, there will be a drop box for donations in Robert’s honor to the organization, Semper Fi & America’s Fund.  If you cannot attend the service, please send donations to:  825 College Boulevard, Suite 102, PMB 609, Oceanside, CA 92057.

Bob aka uncle Bob to me was one of the kindest men I knew. Although Bob was not my family by blood he was still my family, he and Lenita always treated me that way. My heart is heavy for the family although we know he is not in pain now. God has gained an Earth Angel and now he can take care and watch over us in the Heavenly realm. Love you, uncle Bobby. You are forever in my heart.