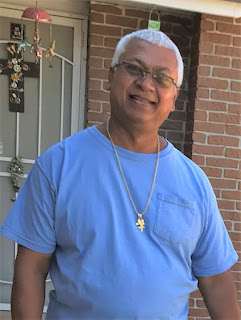 It is with great love and sadness that our family share in the sudden passing of our dear son, husband, brother, and uncle. Arnold died peacefully at Health Central hospital. He was 63 years old.  He was predeceased by his father Ivan. He leaves to mourn his mother Amy, his brother Samuel (Sita Carol), brother Daniel (Ann), sister Rosana (Danny), and his wife Parbattie Bissoon.  He also leaves to mourn his sons Shanell, Simon and Leon. He will be lovingly remembered and missed by his grandchildren. He was an uncle to Samuel Jr., Samantha, Joel, Nathaniel, Jessica, Lucanus, Rhea.

Arnold was known to be a loving and caring person. He was loved by all who knew him.  It’s such a blessing to know that although he closed his eyes on earth, he opened them in heaven. God has him in his arms and we have him in our hearts.

A viewing will be held at Dobbs Funeral Home 430 N. Kirkman Road, Orlando, Florida on Thursday 27th October, from 10AM to 12 noon followed by a Lutheran Service then to Orlando Memorial Gardens for burial.