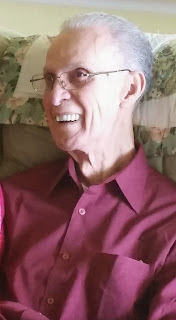 Conrad Vernon Gill was born May 20, 1924 in Colon, Republic of Panama to John Gill and Annie DaSilva Gill.  He was the fourth of five children, all of whom have predeceased him.  He received his education at the Gatun Elementary School and the Abel Bravo Spanish High School in Colon.

Conrad was an outstanding baseball player in Panama and was recruited to join the Indians Farm Team here in the United States.  Although he did not make it to the major leagues, the experience made him a passionate sports fan for the rest of his life.  Upon returning to Panama, he worked for the Panama  Canal Authority and was awarded a certificate of recognition by the United States Government for his service in support of Allied military operations and final victory in World War II.

With his first wife, Lucille Bailey Gill and their two young daughters, Cheryl (recently deceased) and Celmira, he immigrated to the United States and settled in Brooklyn, New York.  Conrad continued his education, worked in accounting and organized and managed his own softball team.

He later met Florel Nembhard; they were married in 1970 and he enthusiastically embraced the responsibility of being a father to her young son Laurence (Larry).  In addition to his own nieces and nephews, he became the beloved "Uncle Con" to the children of in-laws and friends.  Among them he was known for his straightforward, no-nonsense approach.  They knew him as someone whose motto was "my word is my bond" and he lived his life by that principle.

Those of us who knew him well were fully aware of many times when his candor and inflexibility made him a controversial figure to some.  When he took a stand against an injustice toward a group or situation, he unhesitatingly wrote letters to government officials or other authorities to register his complaints or express his opinions.  He believed in fairness and truthfulness.

Throughout his work-life at George Jensen, Memorial Sloan Kettering Cancer Hospital and later at Merrill Lynch (from which he retired), as well as in his private life, he was admired as a man of honesty and integrity.  Anyone who worked with him held him in the highest regard and appreciated his disciplined and conscientious performance.

Conrad was an avid reader and enjoyed discussing his favorite authors.  He was known for his collection and enjoyment of all kinds of music.  However, his extensive collection of Frank Sinatra recordngs which he played frequently in his home demonstrated his steadfast love for his "Frankie Baby".  He often ended a conversation with "Do-Be-Do-Be-Do" whenever it was not resolved to his satisfaction.  He loved dancing and was an excellent dancer, often getting up his beloved "Flo" to dance with him.  With her, he enjoyed entertaining family and friends, played a lot of tennis, traveled widely, and was always trying to capture the moment with his camera.

After a long, well-lived life, his health declined over the past two years.  On May 12, 2015, with his loving wife and other family members at his bedside, he passed away peacefully.

Left behind to celebrate his life are wife Florel, daughter Celmira, son Laurence and daughter-in-law Desiree; grandchildren Darnel, Ayana, Julian and wife Netasha, Spencer, Lauren and Camryn; great-grandchildren Julianna and Nylah, and a host of relatives, friends and neighbors.


Forever in our hearts.

Dearest Florel and family.
Please accept our sympathy and prayers. May God give you peace and strength as you go through this time of grieving. Love
Hazel, Clarence and Adeena Ademu-John

Aunt Flo and Larry - we share in the loss of Uncle Con. Always welcoming us into your home for memorable visits and sharing his beloved collection of Robert Ludlum books with Enez! May his soul rest in peace.

Dear family and friends,
As we approach the first anniversary of Con’s transition, I would like you to know that on June 24, 2015, our beloved Conrad was inurned at the Cremation Garden of Memories, Woodlawn Memorial Park, Gotha, Florida. Officiating were The Reverend Jabriel S. Ballentine, Rector of The Episcopal Church of St. John-the-Baptist; assisted by Mrs. Cynthia Hammonds, Lay Eucharistic Minister. Joining me at the ceremony were other close family members and friends in the area.
Flo

Uncle Con, I find it hard to believe that tomorrow will mark one year since you were called back home - free of earthly pain and sleeping in peace. I know you are in safe hands but it doesn't stop me from missing your laugh, your smile and the many jokes that we shared (publicly and in private). Your life lessons live on - "my word is my bond"! You know "I will always have your back" and we are are here for Aunt Flo for whatever she needs. Gill, you took a piece of my heart with you and one day, a long time from now, I will come find you to take it back. In the meantime, I know mommy's got you. Keep on singing, Gill - shoobeedoobeedoo....You Did it Your Way..

Can't believe it's been a year already. Birthdays will never be the same since I can't share them with you anymore. I miss you dearly but know you're with Mom so that gives me some comfort. I keep a picture of us on the fridge and even though you're not smiling in it I still remember your laughter. You were one of a kind!!

Uncle Con - It's been a year without your physical presence but the memories are so strong and positive that you're still very much here with us. Your impact in my life is difficult to measure so let's just say it's been huge. I'm sure most feel the same as I do and what we mourn is our inability to sit together and celebrate our relationship. Never to be forgotten and always easy to recall why you've been so special!

P.S.: I'll be pouring two drinks for us later to toast your memory....you'll have to forgive me for drinking yours!

Uncle Con I can't believe it's been a year since we've lost you. I will miss your intelligence
and your laughter. I know Andre will miss your conversations. You and Aunt Flo welcomed us including our boys
into your beautiful life, we will always remember you.

Uncle Con! I know you are living and laughing it up with our Heavenly Father! We know you are the life of the party! We love you and we miss you but we are fortunate to have been blessed by your presence in our lives. Aunt Flo, we have to continue the party down here and enjoy the daily blessings that God provides us with joy and gratitude. I'm so so thankful for your love and inspiration. Love you always!

Uncle Con was a delight, he knew exactly how to make someone smile, laugh and be merry again.. You will be missed, you may be lost from us right know but you will never be forgotten.. I loved you and will miss you forever..

We will always remember that smile. He was a very kind and loving person.

Can't believe it's been a year. Uncle Con was one of kind....So blessed to know that we got the chance to experience his love and a chance to love him. That feeling will never leave.

Uncle Con was one of a kind and I had the pleasure of sharing my birthday with him. I couldn't call him last year and I won't be able to ever again to share our birthday but I will always remember the times we shared and the laughter. There will never be another and I'm so glad that you were in our lives and our children knew you.

Then there was that time when we were all gathered at Gigi's for a bbq. Uncle Con and I were chatting and he said he was getting up to make a drink (Rum and Coke) I happily offered to make it for him. Uncle Con took a sip of the drink and began coughing. I pat his back and Aunt Flo ran over to see what was going on. I poured him straight rum and forgot the coke. He laughed and said I could never work his bar😜. Then there was this time when I was days away from moving to Germany and Aunt Flo and Uncle Con invited me over to the house to have lunch with them. We laughed and shared stories for hours. Love you Uncle Con. I promise I've gotten better at making drinks😘. I still see you smiling.

Uncle Con was the best. Can't believe it's been a year since he went to sing with the angels. I will miss him.

Where do I begin? I’ve known Uncle Con since I was 8 years old. I’ve seen every side of him and can remember all the corny things he would come up with to make me, Larry and Russell laugh. Even when he was being stern it was hard to take him seriously. He had such a great personality and was always fun to be around. I still think about him from time to time and will miss him. I’m happy he was able to see the man I’ve become and the family I have now, from the shy and quiet kid I was so many years ago that he gave encouragement to, advice and served as a role model when I was growing up...RIP

My Uncle Con was always a father figure in my life. We fought like cats n dogs when I was a pre-teen and teen. I thought he was always picking a fight with me. With age, comes maturity...as I got older and spent quality time getting to know my Uncle I began to realize every "picked fight" growing up was WELL warranted lol!! I did a LOT of dumb s#&t and he always told me how he felt and didn't sugar coat it. smile emoticon That no BS quality is what I admired about him the most. I loved him sooo much and miss him greatly...

I will always pour out some of the Whites on May 20th in honor of the man so quick with a smile or a great story, who welcomed this stray from the Bronx with open arms, even though i married the woman he often greeted with an "Oh no," or "You again?". He was the best! He did it "His way"! Still don't know how somebody just didn't like chicken. Like, any chicken

Dana N Shorte replied to Steve's post: "Soo funny!!! He'd look at me come through the door, roll his eyes to the celing and say "ooh brother!" LOL (laugh out loud)!!

Reading all the other comments again proves how wonderfully made Uncle Con was. I met him as an early teen and love the fact he didn't allow anyone to force me to do what i did not want to do. We had our own secret language which always ended with a smile. It is my blessing to have met and known the presence he has had in my life. Forever with us, love you Uncle Con.