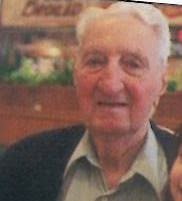 Eleuterio Federico, age 91, of Orlando passed away Tuesday, June 17th, 2014.   Eleuterio was born in Providence, RI, the son of Mr. and Mrs. Joseph  Federico.  He served in the U.S. Army, was employed as a military civilian radio repairman and was a member of Holy Family Catholic Church Orlando, FL .
He is preceded in death by wife Esther Federico (11/6/2011) and leaves to cherish his memory son Dr. Thomas (Elaine) Federico of Canton, GA; daughter, Juliane (Allen) Byrd, of Clermont, FL; brother Anthony Federico of Rhode Island; 6 grandchildren and 1 great-grandchild.
The family will be receiving friends at Dobbs Funeral Home on Sunday, June 22, 2014 from 4:00 until 6:00 pm.  A Mass of Christian Burial will be celebrated at at Holy Family Catholic Church, Orlando, FL, at 11:00 am on Monday, June 23rd, 2014 with Father Justin Vakko officiating, followed by interment at Woodlawn Memorial Park Cemetery.
Posted by Dobbs Funeral Home Obituaries at 4:01 PM

My condolences to the family during this difficult time. I am truly sorry for your loss. Please find comfort and hope in God's promise found at Revelation 21:3,4.

I wanted to offer my heartfelt condolences.  I know the pain of death is heart breaking, but God's word offers us a wonderful hope.John 5:28, 29 "Do not marvel at this, because the hour is coming in which all those in the memorial tombs will hear his voice and come out!"

Revelations 21:3,4 "With that I heard a loud voice from the throne say: 'Look! The tent of God is with mankind, and he will reside with them, and they will be his peoples. And God himself will be with them. And he will wipe out every tear from their eyes, and death will be no more, neither will mourning nor outcry nor pain be anymore. The former things have passed away.'"

I hope these scriptures have brought you a measure of comfort. You will be in my prayers.

If you would like to know more please visit JW.Org