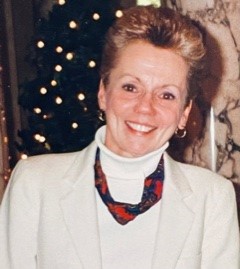 Vivian (Smith) Yeomans, Hopkins passed away quietly at home on October 29, 2021 after a long illness. Born on September 29, 1940, she was 81. She was a member of SS Cyril and Methodious Byzantine Catholic Church in Ft Pierce FL and a daily communicant at St Sebastian Catholic Church in Sebastian FL.

She is survived by her beloved husband of 34 years, Christopher Hopkins and her sons Paul Yeomans of East Longmeadow; Kenneth Yeomans and his wife Suzie of Wales; Brian Yeomans and fiancée Destiny Carruthers of East Longmeadow and seven grandchildren, Sean, Ryan, Christopher, Shelby, Stephen, Zachary, and Nicholas; two great grandchildren, Trevor and Madyson and two stepchildren Aimee Hyland of Springfield and Michel and Meghan Hopkins of Stafford Springs CT and three step-grandchildren Hannah, Paige, and Nicole.

While raising her family Viv was a volunteer teacher assistant at Mountain View School in East Longmeadow.  Viv was a member of the St Mary Church choir in Hampden. She was employed at Farm Credit Banks, Springfield as the chief telephone operator. Viv was featured in an article from the First District Times published by Farm Credit titled, “Vivian Hopkins, The Voice of Farm Credit in that Voice an Image”.   It stated that “Viv’s voice creates, for many (in the banks associations), the very ‘image’ of Farm Credit and may even establish the caller’s perspective of the business and all its associates. She may handle as many as 700 incoming calls a day. And she hasn’t yet told anyone to “fly a kite” though the thought has, says she, “…occasionally crossed my mind.”

Viv went on to be an Executive Assistant and chief receptionist at Mass Mutual Life Insurance Company, home office in Springfield. That smile, larger than life and welcoming grace treated all with the highest professionalism. She was known as ‘Miss Mass Mutual’ to all. In an excerpt of a letter it stated: “When I think of the thousands of clients, customers and associates who have passed through the front door during your tenure as the “first face” of the Company, I can’t think of a better person to have been there to greet them all. Your energy, enthusiasm, and diligence are contagious, and have quietly provided valuable lessons to all of us in our day-to-day dealings with others.”

After moving to Florida, Viv’s desire to stay fit, motivated her to organize morning neighborhood walks. That was not enough. After the warmup walk, off to the National Training Center in Clermont. Open to local residents this facility to trains potential Olympians. Spinning, Zumba, Aerobics, no challenge to Viv – she loved it all and thrived on the challenges. Once Viv’s illness had progressed her friends rallied around her to show their love and support.

No matter where she was, church, work or at play her warm, cheerful smile endless energy inspired everyone.

There will be a Divine Liturgy of Christian Burial at:

Liturgy of Christian Burial at 11AM

In lieu of flowers donations may be made to the following:

The Association for Frontotemporal Degeneration